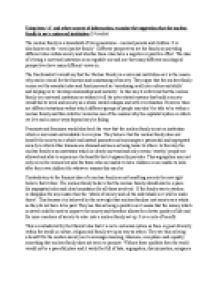 Using item A and other sources of information, examine the suggestion that the nuclear family is not a universal institution

It is a cycle of benefit. This is contradicted by the Marxist idea that it is not a universal system as there is great diversity within the world in culture, religion and family set up as way as others. They see this as being a benefit for the modern society as it encourages learning, tolerance, acceptance and equality something that nuclear family does not seem to promote. Without these qualities then the world would not be a peaceful place and it would be full of hate, segregation, discrimination, arrogance and one culture, country, religion, race and other differences would be completely divided. This would not benefit society as we are heavily reliant on other countries for trade, income and help in times of crisis as are other countries are on us. However it must be remembered that the idea of the nuclear family occurs within other countries some of which have cultures which are very different from our down. For example in china it is encouraged that a young women becomes married and has a child even though it is restricted as there is only meant to be one child born to each couple due to china?s one child policy as a way of restricting there over population. ...read more.

This is because it would typically mean that the mother and wife would be left to care for the house and children whilst the husband is earning the income. Even if the women was working then it is likely just to be during the school hours and schooling of the children, this is likely to mean that the husband sis earning the higher income and being the main bread winner for the family. In conclusion the nuclear family after being examined is clearly not a universal institution as everyone?s different as this means that their circumstances, beliefs and views will be different also. Because of this everyone?s idea of how a family should be run and provided for will also be different. It should also be remembered that due to changes in circumstance a set up mirroring that of a nuclear family may not be available to everyone. This could be because of the person they married, illness, disability, death or the amount of children who are born into that family. The majority of these thaings are things that people are unable to control. The nuclear family cannot be made universal without changing the boundaries which make it so. ...read more.