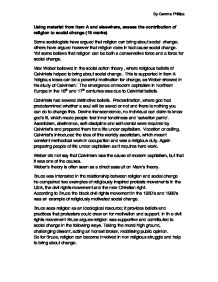 Using material from item A and elsewhere, assess the contribution of religion to social change (18 marks)

Using material from item A and elsewhere, assess the contribution of religion to social change (18 marks) Some sociologists have argued that religion can bring about social change; others have argued however that religion does in fact cause social change. Yet some believe that religion can be both a conservative force and a force for social change. Max Weber believed in the social action theory, where religious beliefs of Calvinists helped to bring about social change. This is supported in item A 'religious ideas can be a powerful motivation for change, as Weber showed in his study of Calvinism.' The emergence of modern capitalism in Northern Europe in the 16th and 17th centuries was due to Calvinist beliefs. Calvinists had several distinctive beliefs. Predestination, where god had predetermined whether a soul will be saved or not and there is nothing you can do to change this. Devine transcendence, no individual can claim to know god's ill, which made people feel inner loneliness and 'salvation panic'. Asceticism, abstinence, self-discipline and self-denial were required by Calvinist's and prepared them for a life under capitalism. Vocation or calling, Calvinist's introduced the idea of this worldly asceticism, which meant constant methodical work in occupation and was a religious duty. ...read more.

Kautsky reflects rather than causes change in society. Some Marxists do not see religion as an entirely conservative force, despite what they have been led to think. They recognise the relative autonomy of religion - that is that religion can be a partly independent of the economic base. So religion has a dual character. It can sometimes be a force for change and sometimes be a conservative force. Even Marx believed that religion can be a positive force as it provides comfort for those who are oppressed, even if it is illusory. Friedrich Engels argued that religion inhabits change by disguising inequality, but it can also challenge the status quo and encourage change. Ernst Bloch (1959) - argued that religion has a positive and negative influence on social change. Religion is an expression of the 'principal of hope' - our dreams of a better life (Utopia) These images of Utopia can sometimes deceive people with promises of rewards in the after life. However they may also help people to see what is wrong in the world and create a vision of a better world. There was evidence for dual character of religion called the liberation movement. Liberal theology set out to change society. ...read more.

He described how religion can either support or challenge the employer's hegemonyThe miners had leadership from colleagues who were also lay preachers who helped to convert workers to the union cause. Whereas the textile workers did not have this leadership. The miners were able to use churches to hold meetings but the textile workers did not have this. Churches kept the miners confidence high with supportive sermons e.g. texts from the Bible, but the textile workers met opposition from churches, branding them communists. Moreover, Billing does recognise that religion was not the only factor that played a role. The fact that miners relied on each other for safety gave them a stronger sense of solidarity in opposing their employers A prominent oppositional role His study shows that religion can be used to defend the status quo or to justify the struggle to change it. Billings concludes that religion can play a prominent oppositional role. Overall religion does not always uphold traditional beliefs and functions to maintain the status quo. Both economic and religious factors have been found to play a role in bringing about social change. There is a contribution of religion to social change, however not all religious movements are successful in bringing about social change and whether religion helps to bring about social change or to inhibit social chance varies according to social and historical conditions. ?? ?? ?? ?? By Gemma Phillips ...read more.

The introduction is on the whole pretty good: it’s concise and gives a real indication that the writer will be answering the specific question set. However it could be improved by actually mentioning the branches of sociological theory that are ...

The introduction is on the whole pretty good: it’s concise and gives a real indication that the writer will be answering the specific question set. However it could be improved by actually mentioning the branches of sociological theory that are associated with what they’re saying, for example they could say “Marxists believe that religion can be both a conservative force and a force for social change” instead of simply “some believe”. This would just instantly signpost to the examiner that the candidate has good sociological knowledge and understanding. The conclusion is good, but the main body of the essay could be better structured – more detailed paragraphs are needed, for example when it says, “Gramsci sees religion having a dual character and he notes that in some cases it can challenge and support the ruling class”, this could be added to the end of a paragraph to gain evaluative marks. Larger paragraphs would make this essay flow more.

Key terms are used very well in context, such as “predestination”, “asceticism” and “civil rights movement”. Key theorists are also well explained like Engels, Parsons and Gramsci, but the writer should state which branch of sociological theory they are concerned with, for instance Parsons is a Functionalist, which reflects his evolutionary view on religion and social change.
The candidate makes good use of sociological evidence though which will gain them lots of “understanding” marks. For example they state, “Billings (1990) did a study on religion and class conflict - which was the Case of Coalminers and textile workers in Kentucky”, which shows that they know what the examiner wants, as they explain rather than just state facts.

There are a few noticeable spelling mistakes in this essay, such as “devine” instead of “divine”, but the thing that really needs to be altered are the mistakes when discussing the key ideas – for instance they mention “social chance” instead of “social change” and “liberal theology” instead of “liberation theology” which could have been corrected with a proof read. There a few grammatical issues, such as the writer discussing views of “Calvinist’s” rather than “Calvinists” – the apostrophe here is not needed.