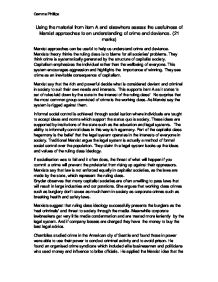 Using material from item A and elsewhere, examine reasons for the appeal of the new age and new religious movements.

Using the material from item A and elsewhere assess the usefulness of Marxist approaches to an understanding of crime and deviance. (21 marks) Marxist approaches can be useful to help us understand crime and deviance. Marxists theory thinks the ruling class is to blame for all societies' problems. They think crime is systematically generated by the structure of capitalist society. Capitalism emphasizes the individual rather than the wellbeing of everyone. This system encourages aggression and highlights the importance of winning. They see crime as an inevitable consequence of capitalism. Marxist say that the rich and powerful decide what is considered deviant and criminal in society to suit their own needs and interests. This supports item A as it states 'a set of rules laid down by the state in the interest of the ruling class' No surprise that the most common group convicted of crime is the working class. As Marxist say the system is rigged against them. Informal social control is achieved through socialisation where individuals are taught to accept ideas and norms which support the status quo is society. ...read more.

Marxists suggest that ruling class ideology successfully presents the burglars as the 'real criminals' and threat to society through the media. Meanwhile corporate lawbreakers get very little media condemnation and are treated more leniently by the legal system. And if company bosses are charged they have the money to buy the best legal advice. Chambliss studied crime in the American city of Seattle and found those in power were able to use their power to conduct criminal activity and to avoid prison. He found an organised crime syndicate which included elite businessmen and politicians who used money and influence to bribe officials. He applied the Marxist idea that the ruling class have the power to ensure that only 'safe decisions' are made the passing of laws. According to Marxism, laws aren't the will of the people. They're a reflection of ruling class interests. Other than the most serious crimes of murder, rape and violence, the vast majority of law in the UK is property law. Chambliss wrote that most of this law serves to keep working class people away from the property and land of the rich. ...read more.

The first one being secrecy, if people think they can get away with committing the crime they are more likely to commit it. The second is skills, if you haven't got the skills to commit a crime you couldn't do it. You simply couldn't just go steal a care if you hadn't got the skills to. The third is supply; the person wanting to commit a crime will need to be able to get equipment to carry out serious crimes. The forth is symbolic support, all offenders must have some justification for their activities. And the fifth being social support, you may need others who share similar values to support and confirm the values that justify crime. However Marxist ignore the victims. They don't take into account the harm done by offenders. Some may say that not all laws are for the bourgeoisie, there are laws such as drink driving. Feminist claim that it focuses too much on class inequality and ignores patriarchy and the way it can affect the making of law. Overall Marxist approaches do add to our understanding of crime and deviance as they explain how crime lies within the nature of the capitalist system. ?? ?? ?? ?? Gemma Phillips ...read more.