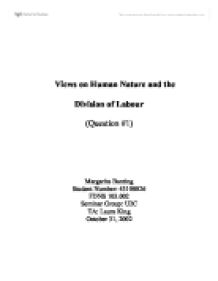 Views on Human Nature and the Division of Labour

Views on Human Nature and the Division of Labour (Question #1) Margarita Banting Student Number: 43108026 FDNS 103.002 Seminar Group: U2C TA: Laura King October 31, 2002 Rousseau's, Smith's, and Marx's differing perspectives on human nature provides a basis for their reasoning on the division of labour. Rousseau believes that as man perfects his ability to reason concepts, the more corrupt he grows to be. With this belief, Rousseau reasons that man becomes corrupt when he creates the division of labour. Alternatively, Smith reasons that the division of labour exists because of man's instinct to "barter" (317). In contrast to Rousseau, he perceives the division of labour as advantageous to the economy. Lastly, Marx sees the division of labour between the proletarian and the bourgeois. Dependence, greed, and freedom are characteristics of human nature that allow the division of labour. The men seek an effective ideology that allows human error, and its vices to occur in society, without disrupting it. Rousseau argues that through the development of "education" and "habits", man has "been able to corrupt" himself (294). At the start of his progression, man's relationship with nature is simple and innocent; he is not yet aware of his ability to reason. But Rousseau notices that through time, man's abilities increase. Life, for him, becomes increasingly complicated. ...read more.

In civil societies, people live in an abundance of product. This abundance is a result of the presence of the division of labour. For example, in the art of pin making, several trades are practiced. One labourer "[draws] out the wire", another straightens it, a third cuts it, a fourth to point it, and a fifth to "grind it at the top for receiving the head" (316). If one man were to perform the five tasks, he would "scarce [...] make one pin in a day" (316). He would lack education in all the tasks and would also not be "acquainted with the use of machinery employed in it" (316). But with five men specializing in their respective trades, they are not only able to provide sufficient pins for themselves, but also a surplus is generated from the mass production of the pin. As a result, manufacturers are able to keep up with the demands of a populated society. The division of labour clearly serves as an advantage to the economy. Smith reasons that the division of labour originates from man's tendency to "barter" (317). Smith's saying, "Give me that which I want, and you shall have this which you want" (318), accurately expresses man's method of attaining his needs. Man trades in self-interest but depends on others' "co-operation and assistance" (318) ...read more.

pieces machinery, they set factories ablaze" until they "restore by force the vanished status of the workman of the Middle Ages" (453). Dependence, greed, and freedom are characteristics of human nature. If these characteristics are manipulated or ignored, destructive events could occur, as described by Marx in Communist Manifesto. The men, in search of an effective ideology, present their different views on human nature. Human nature is the basis upon which the men reason the causes of the division of labour. Since their perspectives are not identical, their reasons of the causes of the division of labour also are not identical. Rousseau sees human nature as progressive. From basic instincts come the ability to reason, and from reason comes the division of society. The inequality in the division then leads to the slow corruption of the society. Smith, on the other hand, sees the division of labour as an advantage to the economy because it stems from an innate tendency to trade. Marx sees the presence of the division of labour due to the innate vices that plague society. Out of greed, the bourgeois gain from the poor proletarians whom they depend on. But the proletarians retaliate and regain their essential freedom. While the men fail to seek a suitable ideology that gladly accommodates the vices of human nature, we witness the true power of its vices as it persists to plague man. ...read more.