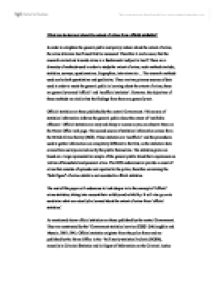 What can be learned about the extent of crime from official

They have altered some notifiable offences to summary offences, for instance 'criminal damage of �20 or less was not counted before 1997, but is now notifiable' Therefore, this led to a '7%' increase in recorded crimes (Jones, 2003; 52). Such figures are then disingenuous when comparing one year to another, in this case it would mislead the public in believing that criminal offences have rose by 7% as they do not explain such changes in the published official statistics. There is also a problematic issue with the counting of criminal offences. The way in they are counted has changed several times over the past years. The method used for counting criminal offences used to be a complicated one 'if several offences were committed in one incident, only the most serious would be counted unless the offences were of violent or sexual nature' (Jones, 20003; 53). This then led to problems with misinterpretation as many police forces looked at it differently. Due to this the counting rules were amended again in 1998 where one crime was recorded per victim. This then led to an immense increase of '7%' in recorded crime rates, in effect making the extent of crime appear much higher (Williams, 2004, cited in Simmons 2001; 45). ...read more.

What can actually be learned about the extent of crime in Britain from the official crime statistics is much distorted. Not only do they give a distorted figure of the extent of crime the information provided from them is also very vague. They do not provide information on the number of crimes solved, who is sent to prison, and who commits crimes. As Williams (2004) points out: "The more involved the incident becomes with the criminal justice system, the less representative it is of the offence" (Williams, 2004; 85). They also give an inaccurate representation of the actual crime levels as not all crimes are reported and not all them reported are recorded. They also only include information about 'noifiable offences', subsequently more than half of the crimes taken place are not incorporated in the official crime statistics. How can statistical information be relied upon when it does not give a true representation? Is there an essential value of official statistics? Critics would say no to these questions, as some see the official crime statistics as been totally 'useless'. However in comparison to other forms of crime research methods, it seems to be that they all have there uses and drawbacks. In order to balance the probabilities of such research methods being more accurate, maybe one must consider using all the research methods in a grouping format. ...read more.