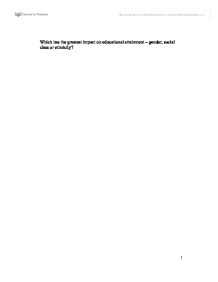 Which has the greatest impact on educational attainment &amp;#150; gender, social class or ethnicity?

Which has the greatest impact on educational attainment - gender, social class or ethnicity? Many sociological studies have been carried out in an attempt to explain the variations in educational performance between different social groups. From these studies, great emphasis has been placed upon certain factors such as social class, gender and ethnicity with relation to educational attainment. Sociologists agree that these facts, being your background, what sex you are (male or female) and what ethnic group you belong to, all impact greatly in the success rate of an individuals educational attainment. When social class is investigated in relation to educational attainment, research carried out by sociologist King (1) (1970) reveals that a child's educational success is related closely to their home background and the social class group to that of the parents. Most socialists would agree with King in the view that the higher a child's parents are in the social class structure the greater that child's chances of educational success. Therefore it is assumed that the children of working class parents do not accomplish as much academically as the children of middle class parents. Socioglists suggest a variety of reasons for the relative educational "failure" of the working class. These reasons are the influence of the home, the neigbourhood/peer group, and the influence of the school. Along side these explanations is also the issue of intelligence/IQ. Psychologist H Eysenck (1971) would argue that the reason for the difference in educational attainment is that of innate intelligence, the fact that individuals inherit their intelligence/IQ from their parents in much the same way that a person would inherit their facial expressions. Eysneck states "what children take out of schools is proportional to what they bring into the schools in terms of IO."(2). Other sociologists would disagree and argue, what is deemed intelligent varies from society to society, IQ scores vary over time and can improve with practice, and also that IQ tests are biased in favour of the middle class as these tests are largely conducted and carried out by members of the middle class group. ...read more.

his main view was that the teacher was the tool to educational achievement; good teaching results in children feeling motivated thus succeeding, bad teaching results in children feeling unmotivated and uninterested thus failing in their education. Labelling has been studied by intereactionists Rosenthal and Jacobson (14) (Pygmalion in the classroom) they are particularly interested in the self-fulfilling prophecy adopted by the child as a direct result of labelling. They pointed out that how a teacher acts towards a child could strongly influence their behavior in school and their attitudes towards their attainment. If a teacher labels a child as a troublemaker then the teacher may act in a different way towards him/her than towards a pupil that has been labelled as hardworking and intelligent. It is believed that the children then respond to the teacher's label, either being discouraged or encouraged in their education. Streaming works along side labelling dividing children into teaching groups according to general ability. Some sociologists have suggested that teachers label children according to their social class, and as a result look down upon the lower working class and make less effort with them others would dismiss this and believe that through streaming the child receives the correct level of teaching for their ability. From analyzing all the above points and studies so far, it can be said that social class (your background) can greatly effect educational attainment. It is widely argued that gender influences attainment. Sociologists have noted the development of the 'the gender gap' i.e. a difference in the level of achievement in boys and girls under sixteen. Studies show boys do not Perform as well as girls in standard subjects (literacy, math's) in school, girls are now overtaking boys at a higher-level standards, notably the 'A' level results of 2000, however Post-16 girls tend to drop out of science and technology despite doing better than boys at GCSE. ...read more.

Their use of English may be looked down upon in the school and the content of the schoolbooks may ignore their culture, stressing only white European culture. PE deals only with western sport. Ethnic minorities are underrepresented in the teaching profession. Language can prove to act as a barrier for some groups. Family values in relation to education plays a major factor, it has been suggested that the reason why the African Asian and Pakistani ethnic groups do well is that their families are very close knit and this provides an exceptionally stable background for study (however this point is criticized by some, Pakistani children usually come from large families, the point of large families is used negatively at times but in this case it is seen as a positive point). Children from ethnic minority groups also have to face racism (20) (both differently and indirectly). It has been suggested that Pakistani and African Asian children seem better able to reject it. It is thought that this is because they have a greater sense of cultural identity than say for example West Indians. They are more able to retain a sense of community and independence of culture, which makes them sure of their own worth. Most schools operate a policy in order to respond to the educational underachievement of some ethnic minority students. One method is the secularised approach, this is the case where religious education is removed and replaced with ethical and cultural studies designed to raise awareness and give pupils a better understanding of their fellow students. Another method is anti-racist education, this being the most difficult approach. It usually focuses on the prejudices held by individual pupils. It is confrontational and controversial. This method is regarded as the colour-blind approach and is largely criticized. In conclusion to the question of which has the greatest impact on educational attainment gender, social class ethnicity, it can be said that all three impact greatly upon attainment. However some sociologists would raise the point that differences and opportunities still vary by and are influenced mostly by social class background. 1 1 ...read more.