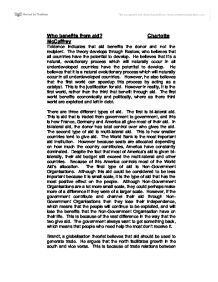 Who benefits from aid?

One of the main ways that the third world is exploited is through aid tying. Up to 70% of government aid has direct commercial benefit to businesses. They do this by providing expertise and technology for specific third world projects. The economic considerations that arise from this could lead to debate over who benefits from this aid, as it seems to be that the first world makes more than they give. Through aid tying, they pursue their own commercial interests. An example of a form of aid tying, where the people were most definitely not benefiting, was through the incident regarding Westland helicopters. In 1985 the British government gave aid to India, provided that part of the money was used to buy Westland helicopters. This got the British business out of financial trouble. The helicopters proved unsuitable for the Indian terrain, and only lasted a very short period before breaking down. The Indian government couldn't afford to repair or replace the helicopters, and therefore this aid was wasted on the third world, but still benefited the first. Aid tying could also be seen as a way of opening up new markets. ...read more.

The US governments can afford to give food or sell it at a lower price than the third world people can produce it. This puts third world farmers out of business. The inflow of food aid, even in emergencies, has proved to be constantly detrimental to local farm economies. An example of this is Somalia. In 1991, a civil war began which interrupted domestic transportation. This meant that there was a food crisis in large regions of the country. An estimated 4.5 million people (over half of the total estimated population of the country) were threatened by severe malnutrition related diseases. In December of 1992, U.S. troops landed to distribute food, when the worst of the famine was already over. The death rate had dropped a huge amount, from three hundred a day, to seventy. Crops of rice, sorghum and corn had already been harvested by the people of Somalia. However, when food aid poured in, the prices received by local farmers for their harvest was brought down by seventy five percent, and even then sometimes they couldn't sell their goods at lower prices. The U.S. government's solution to this was to provide them with money to buy American food from U.S. companies. Once again, this is pumping the money back into the donor, and putting the recipient at a disadvantage. ...read more.