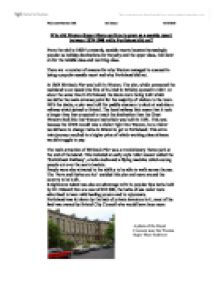 Why did Weston-Super-Mare continue to grow as a seaside resort between 1870-1900 while Portishead did not?

Why did Weston-Super-Mare continue to grow as a seaside resort between 1870-1900 while Portishead did not? From the mid to 1800's onwards, seaside resorts became increasingly popular as holiday destinations for Royalty and the upper class, then later on for the middle class and working class. There are a number of reasons for why Weston managed to succeed in being a popular seaside resort and why Portishead did not. In 1864 Birnbeck Pier was built in Weston. The pier, which connected the mainland to an island (the first of its kind in Britain) opened in 1867. At about the same time in Portishead, the docks were being built which would be the main entrance point for the majority of visitors to the town. ...read more.

People were also attracted to the ability to be able to walk across the sea . The 'Ports and Harbours Act' enabled this pier and more around the country to be built. Knightstone Island was also an advantage with its popular Spa baths built by Dr. Edward Fox at a cost of �25 000, the baths of sea water were advertised to have mild healing powers and to rejuvenate. Portishead was let down by the lack of private investors in it, most of the land was owned by Bristol City Council who would have been more reluctant to spend huge sums of money. Weston had people like Dr. Fox, the Parsley, Cox and Piggot-Smythe famillies who built the Spa (above) ...read more.

The Royal Hotel was a site that greeted any visitors who had boarded a boat to Portishead. It was a fine building with accommodation for over 100 people to have a meal. Weston Super Mares status would have been helped vastly by its long sandy beaches though, which were one of the main attractions of seaside holidays. The main reason that Weston continued to grow and Portishead did not was that Portishead changed its focus from being a commercial seaside resort to an industrial town. A gas works was built, then followed by a Nail factory some years later. The industrial area was situated around the docks and low lying areas of Portishead and a Power Station was later built on the site. Phil Jones-Gerrard 10B Mr Keane 10/5/2003 ...read more.