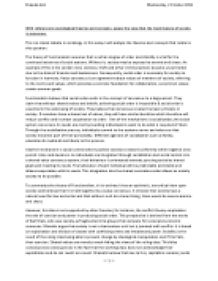 With reference to sociological theories and concepts, assess the view that the main feature of society is consensus.

﻿Shawda Aziz Wednesday, 2 October 2013 With reference to sociological theories and concepts, assess the view that the main feature of society is consensus. This is a classic debate in sociology. In this essay I will analyze the theories and concepts that relate to this question. The theory of functionalism assumes that a certain degree of order and stability is vital for the continued existence of social systems. Without it, society may be exposed to anomie and chaos. An example of this is the London riots, violence, theft and other criminal actions became uncontrolled due to the state of disorder and lawlessness. Consequently, social order is necessary for society to function in harmony. Value consensus is on agreement about values of members of society, referring to the norms and values, which provides a concrete foundation for collaboration, as common values create common goals. Functionalists believe that social order exists in the concept of consensus to a large extent. They claim that without shared values and beliefs, achieving social order is impossible & social order is essential in the well-being of society. ...read more.

Shared values are merely a mask hiding the views of the ruling class. This false consciousness consequences in the fact that the working class does not acknowledge their exploitation and do not revolt as a result. Marxists believe that due to this, capitalism remains; social reproduction takes place leaving the rich richer and poor poorer. Conflict theories, such as Marxism, see Functionalism as a conservative theory that emphasise the status quo. The key focus is on harmony and consensus rather than conflict. Marxists argue that this theory legitimates the privileged position of the ruling class or groups of authority who have the most to lose from any revolutionary changes in society. To conclude on the theory of Marxism, it portrays a strong emphasis on society being in conflict. It proposes the importance of power and inequality and ideology as a means of social control, both suggesting that society is not how Functionalism views it. It challenges the principles of Functionalism by questioning the ignoring of conflict and disagreement and how it avoids the active nature of a human being. A further theory that suggests that society is in fact not in consensus, but conflict, is Feminism. ...read more.

These services involve keeping the breadwinner in best of health and fitness, along with keeping them in the best of moods through satisfying his needs. Subsequently, they are expectant to rear children and socialize them by teaching the norms and values of society as they will be the next generation of workers. This ultimately shows society is not consensus because it advocates that society is split into class and gender and treatment towards certain groups are unequal and purely based on how they can provide for society. Finally, to conclude, on a whole, sociological theories are in argument if a society is either completely consensus or conflict based. Some theories believe it is consensus, while others put emphasis on conflict. One of these is the major theory of Functionalism which applies a positive and noncritical view upon society, which could be described as wearing rose-tinted glasses. However, this theory contrasts vastly with other theories which are conflict based in their entirety. For instance, Marxism emphasizes that society does not provide equality for every type of person, especially depending on class. A further example is the Feminist theory which stress the patriarchal influence upon society, for instance Radical feminists take great emphasis on patriarchal ideology. ~ ~ ...read more.