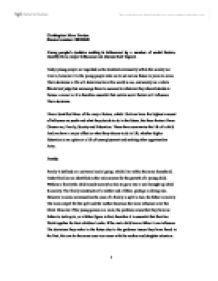 Young peoples decision making is influenced by a number of social factors. Identify three major influences and discuss their impact.Family, Society and Education

Christopher Marc Harden Student number: 08000340 Young people's decision making is influenced by a number of social factors. Identify three major influences and discuss their impact. Today young people are regarded as the troubled community within the society we Live in, however it is the young people who are to set out our future in years to come. Their decisions is life will determine how this world is run, and society as a whole Should not judge but encourage them to succeed in whatever they should decide to Pursue a career in. It is therefore essential that certain social factors will influence Their decisions. I have identified three of the major factors, which I believe have the highest amount of Influence on youth and what they decide to do in the future, the three factors I have Chosen are; Family, Society and Education. These three summarise the life of a child And can have a major effect on what they choose to do in life, whether higher Education is an option or a life of unemployment and seeking other opportunities Arise. Family Family is defined as a universal social group, which live within the same household. ...read more.

However the peer group programme usually only runs to the age of 16 and the young person has to make decisions on their own, it usually comes down to their social context, of which are their family and the working class they live within. A young person living in upper class London s likely to have a greater decision than a young person living in Liverpool due to the social context that they are in. In societies, which suffer from poverty and a depression in the area, the youths are sub-cultured and looked upon as a threat and a non- decision making threat at the highest level. The youths have no say on how society is run and we do not realise that the young people of today are the future of the society we live in. certain societies however have identified this problem, and as a result formed a council of youth, aged between 11-16, the main target of a sub-cultured group of which is seen as that threat. Llanwrtyd mayor Peter James said: "For the first time we have direct contact, consultation and decision-making powers with today's young people who will become our town's future,"- (BBC NEWS (28th September 2003) ...read more.

The above three social factors I believe can influence the decisions made in life by the youth, it can determine how society perceives the youth and how the youth can develop in creating a much better society throughout not just the nation but the globe. For the youth are our future, they will determine how the world is run, we must not see them as trouble causes but as young adults who can change the world through their decisions. Reference list ("Advocates for youth" November 2007 [online] available at: http://www.advocatesforyouth.org/PUBLICATIONS/lpe/index.htm) (BBC NEWS (28th September 2003) Award for first youth council [online] Available a: [http://news.bbc.co.uk/1/hi/wales/mid/3146622.stm]) (BBC NEWS (18th January 2005) Youth project wins award [online] available at: http://news.bbc.co.uk/1/hi/england/oxfordshire/4185013.stm "Learning to make responsible decisions now will stand them in good stead in later life." (BBC NEWS (18th January 2005) Youth project wins award [online] available at: http://news.bbc.co.uk/1/hi/england/oxfordshire/4185013.stm ("Peer education for youth" [online] Babelyte V, Aleksejunaite G, 1996 Jul 7-12, available at: http://gateway.nlm.nih.gov/MeetingAbstracts/102220681.html "The family holds within itself the future of society....the family is the vital environment where every child brought into the world is welcomed" (Pope John Paul 2nd (1993) Roche, J, Tucker S., Thompson, R. and Flynn, R (ed) (2005) youth in society, (2nd Edition) London, Sage. p138 1 ...read more.