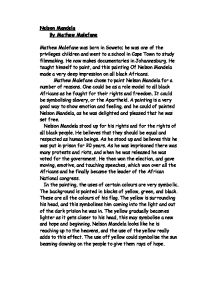 A painting of Nelson Mandela

Nelson Mandela By Mathew Malefane Mathew Malefane was born in Soweto; he was one of the privileges children and went to a school in Cape Town to study filmmaking. He now makes documentaries in Johannesburg. He taught himself to paint, and this painting Of Nelson Mandela made a very deep impression on all black Africans. Mathew Malefane chose to paint Nelson Mandela for a number of reasons. One could be as a role model to all black Africans as he fought for their rights and freedom. It could be symbolising slavery, or the Apartheid. A painting is a very good way to show emotion and feeling, and he could of painted Nelson Mandela, as he was delighted and pleased that he was set free. Nelson Mandela stood up for his rights and for the rights of all black people. He believes that they should be equal and respected as human beings. As he stood up and believes this he was put in prison for 20 years. ...read more.

He went through torturing, pain, and imprisonment because he was seen as different because the colour of his skin. As Nelson Mandela was locked up for 20 years he had aged, and the artist really captured this, this may also show that as time goes on that things changed, the rights of his people and also himself. The way that Nelson Mandela's hand is placed is very important as it can show two things. It may look like that he is reaching out to god and asking him for hope and help. The other thing it may symbolise is Nelson making a speech by the position of his hand. He is talking to the people, showing them the way and hope for the future. The other hand is near the bottom of the picture, where he is holding a spear. This could show that there used to be violence and aggression as they used to fight for their rights but now he expresses his beliefs through his words and his speeches. ...read more.

By showing the bars bent like this is their struggle and fight for freedom and equality. In the painting Nelson Mandela's top has a swimmer with sharks on it. Also in the distance is an island were prisoners were sent. The man that is swimming could be represented, as Nelson Mandela and the sharks around him are the white people. I believe the island represents all the black people, and the belief that they are not part of a community and not equal. I believe an island is used because it is on its own and not in contact with any thing else like the Black community were seen as. I believe the swimmer is Nelson Mandela and he is trying to break free and show the slaves that this is not right and there is a way out. Or as his head is down it may show he is drowned and as he spoke out, he was taken away trapped, and isolated. This painting symbolises a lot of things and really had a big impact on Africans. By Sarah Dawson 10V4 ...read more.