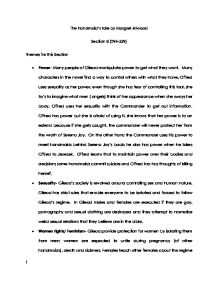 The handmaid's tale by Margret Atwood Section 8 (294-339) Themes for this Section * Power- Many people of Gilead manipulate power to get what they want. Many characters in the novel find a way to control others with what they have, Offred uses sexuality as her power, even though she has fear of controlling this tool, she try's to imagine what men ( angels) think of her appearance when she sways her body, Offred uses her sexuality with the Commander to get out information. Offred has power but she is afraid of using it, she knows that her power is to an extend because if she gets caught, the commander will never protect her from the wrath of Serena Joy. On the other hand the Commander uses his power to meet handmaids behind Serena Joy's back; he also has power when he takes Offred to Jezebel. Offred learns that to maintain power over their bodies and decisions some handmaids commit suicide and Offred too has thoughts of killing herself. * Sexuality- Gilead's society is revolved around controlling sex and human nature, Gilead has strict rules that enable everyone to be isolated and forced to follow Gilead's regime. In Gilead males and females are executed if they are gay, pornography and sexual clothing are destroyed and they attempt to normalize weird sexual relations that they believe are in the bible. ...read more.

It reveals a lot about Margaret Atwood's views about social status, the role of women and her feminist perspectives. The quote sounds poetic as it uses alliteration (the words different, drier and defined) to emphasize the importance of the message being communicated to the readers. The reference to "different flowers" existing "today" is used to show the different social status that each group has and also the relative power and freedom each group has. Atwood also labels these new breed of flowers as "drier" which helps to emphasize the fact that the new generation of society no longer feel the need to rebel against society as they consider the situation as normal because they do not have an understanding of what life used to be like before. Atwood uses this to disapprove humans for not learning from past events. The flowers are also labeled as "more defined" which can be perceived as being the many different types of restrictions imposed on each social class and that even those limited freedoms that may enjoy are strictly controlled by those in power in this society. * Offred learns that her mother who showed different sort of feminism throughout the novel is now in the colonies "I think of my mother, sweeping up deadly toxins; the way they used to use up old women, in Russia, sweeping up dirt. Only this dirt will kill her." (pg. ...read more.

(pg. 314) Moira who has given up on herself has now made Offred give up on hope. Offred knows that if someone rebellious like Moira couldn't escape from Gilead then there is no way she can. This is sad and the reader learns that no one can escape from the wrath of Gilead. * Atwood contrast's Offred's sexual encounter with the Commander at Jezebel versus the encounter with Nick. This passage showed the difference between forced sex and desired sex or love. Offred knows that the commander is somewhat responsible for separating her from her family because the commander is powerful and part of the government of Gilead. The commander wants sex from Offred but Offred can't give him passion and desire that she feels towards Nick. The two themes that contrast one another are, power and love. The commander has power and he gets sex from Offred and Offred has love for Nick and therefore they have sex. In the society of Gilead where love isn't suppose to exists, does, when Offred feels that she has fallen in love with Nick. Through Offred's perspective we see that nothing can govern love and sex can't be regulated by law. "Neither of us says the word love, not once. It would be tempting fate; it would be romance, bad luck." (pg. 337) this shows that even if they wanted to love each other their relationship is inevitable and Gilead is more powerful then their one night stands. ?? ?? ?? ?? 1 ...read more.