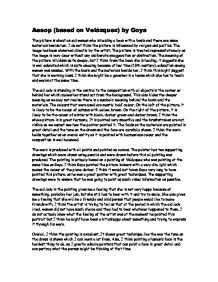 Aesop (based on Velzquez) by Goya

Aesop (based on Vel�zquez) by Goya The picture is about an old woman who is holding a book with a basin and there are some materials beside her. I do not think the picture is influenced by religion and politics. The image has been observed directly by the artist. The picture is treated representationally as the image is very clear without any deliberate exaggeration or abstraction. The meaning of the picture is hidden quite deeply, but I think from the book she is holding, it suggests she is well educated which is quite amazing because at her time (18th century), education among women was unusual. ...read more.

I think the whole picture is in great harmony. It is painted very smoothly and the brushstrokes are not visible so we cannot see how the painter painted it. The folds on the materials are painted in great detail and the tone on the dress and the face are carefully shown. I think the work holds together as an overall entity as it is painted with harmonious colour and the composition is well balanced. The work is produced with oil paints and painted on canvas. The painter has two supporting drawings which were drawn using pencils and were drawn before this oil painting was produced. ...read more.

I think the artist is trying to tell us that at the period in which the old lady lived, women did not have much choice and they had to bear whatever happened to them. I do not actually know what the feeling of the artist was at the moment he painted this portrait but I think he might have been a bit unhappy about something and trying to express it through his work. Overall, I think the painting is excellent. It shows great technique like the way the tone on the dress is shown which I can learn a lot from. Also, I think painting a human's face is the hardest thing to do, so I greatly admire painters that can paint a face in great detail and can portray what the person might be thinking at that time. ...read more.