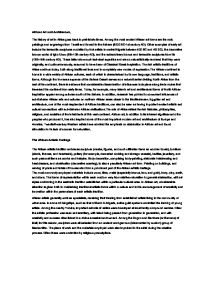 African Art and Architecture, The history of art in Africa goes back to prehistoric times. Among the most ancient African art forms are the rock paintings and engravings from Tassili and Ennedi in the Sahara (6000 BC-1st century AD). Other examples of early art include the terracotta sculptures modelled by Nok artists in central Nigeria between 500 BC and AD 200, the decorative bronze works of Igbo Ukwu (9th-10th century AD), and the extraordinary bronze and terracotta sculptures from Ife (12th-15th century AD). These latter show such technical expertise and are so naturalistically rendered that they were originally, and quite erroneously, assumed to have been of Classical Greek inspiration. The rich artistic traditions of Africa continue today, both along traditional lines and in completely new modes of expression.The African continent is home to a wide variety of African cultures, each of which is characterized by its own language, traditions, and artistic forms. Although the immense expanse of the Sahara Desert serves as a natural barrier dividing North Africa from the rest of the continent, there is evidence that considerable dissemination of influences took place along trade routes that traversed the continent from early times. ...read more.

Body decoration, comprising body-painting, elaborate hairdressing and headdresses, and cicatrization (decorative scarring), is also a peculiarly African art form. Painting on buildings, and carving of posts and lintels of houses also form a prominent part of the African artistic heritage. The most commonly employed materials include wood, fibre, metal (especially bronze, iron, and gold), ivory, clay, earth, and stone. The forms of representation within each medium vary from relative naturalism to general abstraction, with art styles conforming to the aesthetic tradition established within a particular cultural area. In African art, considerable attention is given both to maintaining traditional artistic forms within a culture and to the encouragement of creativity and innovation within the parameters of each artistic tradition. African artists generally work as specialists, receiving their training from established artists living in the community or wider area. In some old kingships, such as that of Benin in Nigeria, active guild systems controlled the training of young artists. Among the nearby Yoruba, important schools of artists were developed at local family compound centres. ...read more.

This period of artistic leadership coincided with the country's increasing degree of international political and financial leadership, and reflected the nation's prosperity. Because of the great size of the country, stylistic variations developed within this main line of artistic growth. Regions that had been settled by different European nations reflected their early colonial heritage in artistic forms, particularly in architecture, though to a decreasing degree from the mid-19th century. Climatic variations across the extent of the country also shaped distinctive regional architectural traditions. In addition, differences persisted between the art produced in cities and that produced in rural areas within the various regions; rural artists, trained or untrained, were isolated from current trends and competitive pressures and developed highly individual modes of expression that were imaginative and direct, independent of prevailing formal conventions. This type of American art falls within the tradition of folk art, or naive art. The decorative arts, in particular metalwork and furniture, also represented an important form of artistic expression during the colonial period. Silver, in the 17th century, and furniture, in the 18th century, were perhaps the most significant American forms of artistic creation and represented the most sophisticated and lively traditions. ...read more.