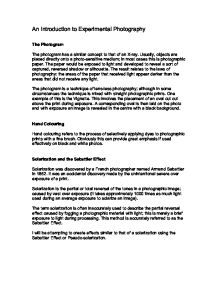 An Introduction to Experimental Photography

An Introduction to Experimental Photography The Photogram The photogram has a similar concept to that of an X-ray. Usually, objects are placed directly onto a photo-sensitive medium; in most cases this is photographic paper. The paper would be exposed to light and developed to reveal a sort of captured, reversed shadow or silhouette. The result relates to the laws of photography: the areas of the paper that received light appear darker than the areas that did not receive any light. The photogram is a technique of lens-less photography; although in some circumstances the technique is mixed with straight photographic prints. One example of this is the Vignette. This involves the placement of an oval cut out above the print during exposure. A corresponding oval is then laid on the photo and with exposure an image is revealed in the centre with a black background. ...read more.

The main characteristics of the Sabattier effect are dark areas appearing lighter and light areas appearing darker - similar to a negative. Solarization prints have a unique, graphic, stylized look. Best results are acquired when using images with sharp, high contrast, simple subjects and strong linear qualities. The Cyanotype Cyanotypes are a type of photographic print associated with their cyan-blue colour. A cyanotype is a very old method of photographic printing which gives monochrome results. There are two main chemicals involved in the process: 1. Ammonium Iron 3 citrate 2. Potassium Ferricyanide When these chemicals are mixed with water they form a photo-sensitive solution. This resultant solution is applied to a material such as paper to give it photo-sensitivity and therefore make it a suitable surface for printing on. When exposed to ultra-violet light, a positive image is produced. ...read more.

This is to avoid over exposure which would occur with double the usual amount of light. A -1EV compensation is made if exposing twice or a -2EV if exposing four times. The alternative method is making a sandwich print. The advantage id that any two negatives can be used but it is advised to ensure they have similar densities or tonal qualities. A disadvantage of the sandwich print is that only a double image can be created; whereas a camera can record multiple images. Two negatives are aligned and exposed simultaneously to result in areas of both image being visible in the print. Due to the thickness of the double negative, a low f stop must be used for printing. Photo editing software, such as Adobe Photoshop, can be used to make digital multiple images. A simple method is to layer the images you wish to use and reduce the opacity of them until you ate happy with the translucency of all of them. ...read more.