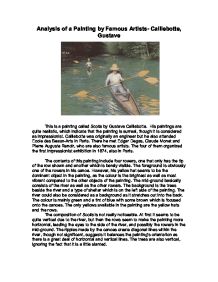 Analysis of a Painting by Famous Artists - Caillebotte, Gustave

Analysis of a Painting by Famous Artists- Caillebotte, Gustave This is a painting called Scolls by Gustave Caillebotte. His paintings are quite realistic, which indicate that the painting is surreal, though it is considered as impressionist. Caillebotte was originally an engineer but he also attended Ecole des Beaux-Arts in Paris. There he met Edgar Degas, Claude Monet and Pierre Auguste Renoir, who are also famous artists. The four of them organized the first impressionist exhibition in 1874, also in Paris. The contents of this painting include four rowers, one that only has the tip of the row shown and another which is barely visible. ...read more.

The colour is mainly green and a tint of blue with some brown which is focused onto the canoes. The only yellows available in the painting are the yellow hats and the rows. The composition of Scolls is not really noticeable. At first it seems to be quite vertical due to the river, but then the rows seem to make the painting more horizontal, leading the eyes to the side of the river, and possibly the rowers in the mid-ground. The ripples made by the canoes create diagonal lines within the river, though not significant, suggests it balances the painting's orientation as there is a great deal of horizontal and vertical lines. ...read more.

The water in the river is also difficult to paint as well, because Caillebotte wants to create a realistic painting and water isn't easy to capture onto a canvas. The mood of this painting gives me a sense of peace, especially when I see rowers drifting smoothly across the river. The trees in the background don't seem to be deformed excessively, which indicates that there's no storm or big gusts of wind. The calmness of the water also shows the passiveness of the environment and atmosphere. I particularly like this painting because of its calmness and peaceful atmosphere it brings to me, though it sometimes misleads my eyes to somewhere not as interesting. I am always amazed by the realistic water the artist paints, for I know how difficult and intricate to draw liquid substances, which is why I like paintings of nature. ...read more.