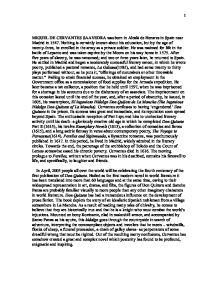 Anyone who reads Don Quixote for the first time inevitably has some preconceptions about it, beginning with the dictionary def

MIGUEL DE CERVANTES SAAVEDRA was born in Alcal� de Henares in Spain near Madrid in 1547. Nothing is certainly known about his education, but by the age of twenty-three, he enrolled in the army as a private soldier. He was maimed for life in the battle of Lepanto and was taken captive by the Moors on his way home in 1575. After five years of slavery, he was ransomed; and two or three years later, he returned to Spain. He settled in Madrid and began a moderately successful literary career, in which he wrote poetry, published a pastoral romance, La Galatea(1585), and had some twenty to thirty plays performed without, as he puts it, "offerings of cucumbers or other throwable matter." Failing to attain financial success, he obtained an employment in the Government office as a commissioner of food supplies for the Armada expedition. He later became a tax collector, a position that he held until 1597, when he was imprisoned for a shortage in his accounts due to the dishonesty of an associate. The imprisonment on this occasion lasted until the end of the year, and, after a period of obscurity, he issued, in 1605, his masterpiece, El Ingenioso Hidalgo Don Quijote de La Mancha (The Ingenious Hidalgo Don Quixote of La Mancha). ...read more.

As a result of reading many tales of chivalry, he comes to believe that they are historically true and that he is a knight who must combat the world's injustices. Mounted on bony Rozinante, clad in makeshift armor, and accompanied by Sanzo Panza as his squire, this hidalgo goes through the countryside in search of adventure, interpreting the commonplace objects and travelers that he meets - windmills, flocks of sheep, a funeral procession, a chain of galley slaves- as perpetrators of some dreadful wrong that must be righted. Out of the resulting merry confusions, Cervantes has somehow created a great and complex novel which posterity has found to be profound, enigmatic and inspiring. However, the novel was not given a classic status until the eighteenth century. The process began in England around 1740, and spread to France, Germany and Spain. Two of the greatest English novels of the century, Fieldig's Joseph Andrews and Sterne's Tristram Shandy are heavily and explicitly indebted to Cervantes. In the age of Enlightenment Cervantes' novel was viewed as a burlesque, satiric and corrective work, admirable for its erudition, good taste, rationality and verisimilitude. ...read more.

Feminist and gender studies have increasingly looked to Cervantes for his perceptive approach to portraying the women of 17th-century Spain. Unlike the majority of his contemporaries, Cervantes expressed great empathy towards women. Although he stops short of a 'feminist' position, the female characters such as Marcella and Dorothea in Don Quixote speak forcefully in defense of women's rights. Loose in structure and uneven in workmanship, it remains unsurpassed as a masterpiece of witty humor, as a picture of Spanish life, as a gallery of immortal portraits. It has in the highest degree the mark of all great art, the successful combination of the particular and the universal: it is true to the life of the country and age of its production, and true also to general human nature everywhere and always. With reference to the fiction of the Middle Ages, it is a triumphant satire; with reference to modern novels, it is the first and the most widely enjoyed. In its author's words: "It is so conspicuous and void of difficulty that children may handle it, youths may read it, men may understand it, and old men may celebrate it." - Israt Jahan Baki 1 ...read more.