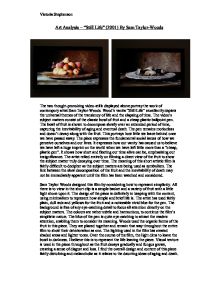 Art Analysis - "Still Life" (2001) By Sam Taylor-Woods The two thought-provoking video-stills displayed above portray the work of contempory artist Sam Taylor-Woods. Wood's vanita "Still Life" excellently depicts the universal themes of the transiency of life and the elapsing of time. The video's subject matters consist of the classic bowl of fruit and a cheap plastic ballpoint pen. The bowl of fruit is shown to decompose slowly over an extended period of time, capturing the inevitability of aging and eventual death. The pen remains motionless and doesn't decay along with the fruit. This portrays how little we leave behind once we have passed away. The piece expresses the fundamental social issues of how we perceive ourselves and our lives. It expresses how our vanity has caused us to believe we have left a huge imprint on the world when we have left little more than a "cheap, plastic pen". It shows how short and fleeting our time alive can be, emphasizing our insignificance. The artist relied entirely on filming a direct view of the fruit to show the subject matter truly decaying over time. ...read more.

They are placed together and remain that way throughout the entire film to show their deterioration as one. The lighting used in the film has created shaded areas and lighter tones. Over the course of the film, the light dims to leave the bowl in darkness. I believe this is to represent the life leaving the piece. Visual texture is used in the piece throughout as the fruit decays gradually and fungus grows, creating a sense of disgust and loss. I find the overall design and content of this piece fairly disturbing and melancholic as it relates to the daunting ideas of aging and death. Woods created this magnificent piece by simply using a camera to record the decomposition of a bowl of fruit over a period of time of around a year. I believe the artist may have contemplated deeply the positions of the subject matters. She needed to greatly consider the background of the piece and the way the light shone onto the fruit bowl. She would then commence the filming and allow the camera to record for the desired amount of time. ...read more.

It excellently captures dark and sad moments everybody experiences in their lifetimes when a close one has suddenly passed away or when time has seemed to pass too quickly. As described throughout this essay it is able to successfully communicate the ideas of the cycle of nature and the inevitability of death. It emphasizes the meaningless of our lives and how our actions will have little impact on the world left behind us. I believe the artist may have been contemplating this insignificance of life when creating this piece and attempting to figure out what she will leave behind for this world once she has passed away eventually. She may have been regretting times she has wasted when life is so fragile and short. The film is greatly disturbing, eerie and thought-inducing and signifies a dark atmosphere. The meaning portrayed by this film, the deterioration of the fruit and the sheer simplicity of the clip causes me to feel this way and creates this depressing atmosphere. In my opinion, this is an excellent, thought-inducing film that has been able to capture a mood and an atmosphere felt by every individual. ?? ?? ?? ?? Victoria Stephenson ...read more.