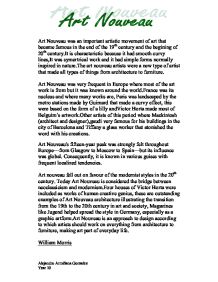 Art Nouveau was an important artistic movement of art that became famous in the end of the 19th century and the begining of 20th century.It is characteristic because it had smooth curvy lines,It was symertrical work and it had simple forms normally inspired in nature.The art nouveau artists were a new type of artist that made all types of things from architecture to furniture. Art Nouveau was very frequent in Europe where most of the art work is from but it was known around the world.France was its nucleus and where many works are, Paris was landscaped by the metro stations made by Guimard that made a curvy effect, this were based on the form of a lilly andVictor ...read more.

Art nouveau fell out on favour of the modernist styles in the 20th century. Today Art Nouveau is considered the bridge between neoclassicism and modernism.Four houses of Victor Horta were included as works of human creative genius, these are outstanding examples of Art Nouveau architecture illustrating the transition from the 19th to the 20th century in art and society, Magazines like Jugend helped spread the style in Germany, especially as a graphic artform.Art Nouveau is an approach to design according to which artists should work on everything from architecture to furniture, making art part of everyday life. William Morris William Morris was an English architect,funiture designer,artist,writer. ...read more.

William Morris was an important figure of socialism in England,founding the socialist league in 1884,but breaking with the movement.William Morris worked for the rest of his life to the Kelmscott press that was founded by himself in 1891. Textiles were one of the most important offerings of William Morris firm,in 1883 he wrote "Almost all the designs we use for surface decoration, wallpapers, textiles, and the like, I design myself. I have had to learn the theory and to some extent the practice of weaving, dyeing and textile printing: all of which I must admit has given me and still gives me a great deal of enjoyment."Willam Morris prefered flat use of line and colour instead of three dimensional shading. ?? ?? ?? ?? Alejandro Armi�ana Gonzalez Year 10 ...read more.