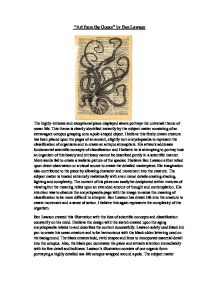 Art from the ocean

"Art from the Ocean" by Ben Lawson The highly-intricate and exceptional piece displayed above portrays the universal theme of ocean life. This theme is clearly identified instantly by the subject matter consisting of an extravagant octopus grasping onto a pole-shaped object. I believe this finely drawn creature has been placed upon the pages of an ancient, slightly torn encyclopaedia to represent the classification of organisms and to create an antique atmosphere. His artwork addresses fundamental scientific concepts of classification and I believe he is attempting to portray how an organism of this beauty and intricacy cannot be described purely in a scientific manner. Mere words fail to create a realistic picture of the species. I believe Ben Lawson either relied upon direct observation or a visual source to create the detailed masterpiece. His imagination also contributed to the piece by allowing character and movement into the creature. The subject matter is treated extremely realistically with even minor details creating shading, lighting and complexity. ...read more.

The subject matter stands alone creating dominance and significance in the piece, shadowing the browning page left behind it. The creature is unique and individual and there is no reason for it to be linked or associated with anything else. The use of lines has created a clear outline to the image and incorporated a significantly large amount of detail and movement. Tones have created shading and lighting and has brought the creature into a three dimensional image of action and intricacy. These tones and lines have created a visual, thought-provoking texture. The overall piece creates a thoughtful, slightly uncomfortable atmosphere. No use of bright vibrant colours has caused the image to seem factual, eerie and dark and causes you to begin to understand the magnificence of the creature. Ben Lawson simply created this piece by removing a page from an ancient encyclopaedia and using a black fine line pen to form an exquisite sea-life creature on top of this. I believe these were the only materials Lawson used to create the extravagant piece. ...read more.

It efficiently captures an atmosphere of interest and surprise at viewing a new species of a strange type and excellence. The piece successfully communicates concepts associated with nature and the brilliance of it. He is attempting to show the significance of animals other than ourselves. Ben Lawson was inspired by his earlier career as a physicist and his worldwide travels to destinations with several diverse habitats. As he was creating this piece I imagine he was contemplating and considering his previous life and actions and attempting to portray the emotions he was feeling at the time directly into the piece. This image is exciting and interesting while simultaneously being informative and realistic. I believe the meaning, the detail and the action of the organism causes many to have this perspective of the piece. In my view, I consider this work to be a picture of excellence and sheer intricacy. Lawson has successfully caused others to hold a different perspective on life and nature surrounding us. ?? ?? ?? ?? ...read more.