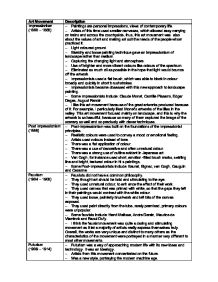 Art Movement Description Impressionism (1860 - 1888) * Paintings are personal impressions, views of contemporary life. * Artists of this time used smaller canvases, which allowed easy carrying on trains and across the countryside, thus, this art movement was also about the values of art and making art suit the needs of the people whom practiced it. * Light coloured ground. * Sketchy and loose painting technique gave an impressionism of landscape rather than realism. * Capturing the changing light and atmosphere. * Use of brighter and more vibrant colours like colours of the spectrum. * Eliminated as much oil as possible in the hope that light would bounce off the artwork. * Impressionists used a flat brush, which was able to block in colour broadly and quickly in short brushstrokes. * Impressionists became obsessed with this new approach to landscape painting. * Some Impressionists include: Claude Monet, Camille Pissarro, Edgar Degas, August Renoir. * I like this art movement because of the great artworks produced because of it. For example, I particularly liked Monet's artworks of the lilies in the valley. This art movement focused mainly on landscape, and this is why the artwork is so beautiful, because so many of them captured the image of the scenery so well and so precisely with clever techniques. ...read more.

* Used repetition of form to produce visual sensations of movement. * Some Futurists include: Filippo Marinetti, Umberto Boccioni, Carlo Carra, Giacomo Balla and Ginco Severini. * I like this art movement because the artists from this movement focused directly on the future, hence the name of the art movement. And since they focused on the future, they developed a impacting theory on the art movements after Futurism. This art movement greatly impacted and affected the future artworks, another factor to why it is actually called Futurism. Cubism (1910 - 1920) * Involved the rather complex practice of breaking up forms, deconstructing and reconstructing, and fragmenting and reorganising the form, whether it was landscape, still life or portrait. * Sacrificed colour to form, and favoured the use of black and white. * Created a new pictorial perspective. * Introduced foreign 'collaged material' into works. * Saw still lifes and portraiture as popular subjects. * Some Futurists include: Fernand Leger, Robert Delaunay, Sonia Delaunay, Pablo Picasso. * I don't particularly like Cubism, mainly because I don't really understand the art movement as well as I would have wanted to. Though it was very abstract in some ways and I usually like abstract works, Cubism just didn't appeal to me overall. ...read more.

* Many artists did not plan composition of their work, but preferred it to be spontaneous, a direct expression of their inner feelings and emotions. * Many painters lost interest in realistic subject matter. * There was an interest in realistic subject matter. There was an interest in the fluidity and quality of the paint and its effects, e.g. drips, blobs, etc. * Some Abstract Expressionists include: Arshile Gorky, Jackson Pollock. * I like Abstract Expressionism again, because it was so different and because it was quite difficult to understand and value it, it was easier to recognise it. It was an expression of one's feelings and emotions and that was what really mattered. Pop art (Late 1950's to mid 1960's) * Addressed the contemporary age and drew its imagery from items of local popular culture. * Was grounded in Dada, elements of collage and assemblage. * Saw acrylic paints used to express the excitement and spontaneity of the new age. * Saw techniques previously used in commercial advertising, become legitimate methods of art production. * Some pop artists include: Richard Hamilton, David Hockney, Jasper Joans, James Rosenquist, Roy Liechtenstein. * Pop art is one of my favourites due to it's impact on what we see around our society nowadays. We can truly see its impact and influence on the world since it is practically everywhere. And because it is now so world-renowned, it can be truly appreciated for it's magnificence. ...read more.