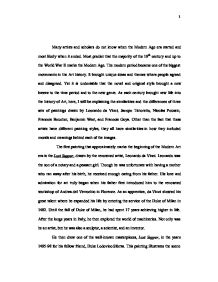 Many artists and scholars do not know when the Modern Age era started and most likely when it ended. Most predict that the majority of the 19th century and up to the World War II marks the Modern Age. The modern period became one of the biggest movements in the Art history. It brought unique ideas and themes where people agreed and disagreed. Yet it is undeniable that the novel and original style brought a new breeze to the time period and to the new genre. As each century brought new life into the history of Art, here, I will be explaining the similarities and the differences of three sets of paintings drawn by Leonardo da Vinci, Jacopo Tintoretto, Nicolas Poussin, Francois Boucher, Benjamin West, and Francois Goya. Other than the fact that these artists have different painting styles, they all have similarities in how they included morals and meanings behind each of the images. The first painting that approximately marks the beginning of the Modern Art era is the Last Supper, drawn by the renowned artist, Leonardo da Vinci. Leonardo was the son of a notary and a peasant girl. Though he was unfortunate with having a mother who ran away after his birth, he received enough caring from his father. His love and admiration for art truly began when his father first introduced him to the renowned workshop of Andrea del Verrochio in Florence. As an apprentice, da Vinci showed his great talent where he expanded his life by entering the service of the Duke of Milan in 1482. Until the fall of Duke of Milan, he had spent 17 years achieving higher in life. ...read more.

Having difficulty with everything, he ended up going back to his hometown. After a few years, he took a different road and head off for Rome in search for a better mentor. There, he encountered Giambattista Marino, the Italian court poet to Marie de M�dicis, who helped him out with his Art. With his help, Poussin was able to find something that interested him to draw, mythological drawings illustrating Ovid's Metamorphoses. One of his known paintings, Cephalus and Aurora, is told in Book 7 of Ovid's 'Metamorphoses'. This Roman text had inspired artists for centuries because of its colorful portrayal of Greek myths. Cephalus was an Athenian hero who usually hunted deer in the woods. He met a beautiful woman while hunting for food and immediately fell in love with Procris and married her. One day while he was on his daily hunt, he meets Aurora, the Goddess of Dawn. She usually fell in love with any mortal men in sight. So she captured Cephalus and brought him back home with her, but Cephalus kept his vows and was very faithful to his wife. Aurora gives up and returns him back home but secretly planning for vengeance. She caused a spirit of jealousy to infect their marriage. This ended up with the accidental death of Procris with the spear of Cephalus. With this famous Greek myth as the base of his painting, Poussin portrayed the scene visually in his painting Cephalus and Aurora drawn in the year 1630. It is a very interesting painting because the viewers can see why Cephalus refuses since the angelic infant is holding the symbolism of rejection, the portrait of his wife. ...read more.

This in contrast to the shiner surface of the soldier. Spacially, the viewer is outside looking in. The light and dark contrast of the line in the sand separates the two groups spatially. There is also a feeling of entrapment created by the line of the mountain that holds the Spanish countrymen into the space. He stands with the Spanish people and symbolizes their courage, faith, and lack of understanding of war atrocities and aggression. The element of time is very interesting in this painting. Goya presents the present-the figure presently being shot, the past-the dead men in the pool of blood-and the future-the long line of men who will be shot. The painting is timeless. It pays tribute to people who are willing to stand up for their beliefs, in spite of, aggressors who would try to destroy them. It also shows the price that the price of war for the victims as well as the aggressors. Goya shows us that the aggressors have become robotic like and inhuman in their treatment of the people they would try to conquer. Unlike the painting illustrated nobility and politeness for death in The Death of General Wolfe, the painting depicts the lack of humanity for people's innocent death in Goya's The Third of May, 1808. There is neither respect, nor guilt when the soldiers are killing the victims of the war. With each painting, each is successful in bringing out the time period, the life of the artist, and the meanings behind the paintings. As we went through six different paintings all in diverse time periods, Leonardo da Vinci; Last Supper, 1495-98 Jacopo Tintoretto; The Last Supper, 1592-94 Francois Boucher; The Toilet of Venus, 1751 Nicolas Poussin; Cephalus and Aurora, 1630 Benjamin West; The Death of General Wolfe, 1770 Francisco Goya; The Third of May, 1808, 1814-15 1 ...read more.