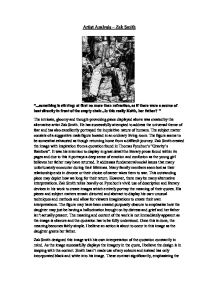 Artist Analysis - Zak Smith "...something is stirring: at first no more than refraction, as if there were a source of heat directly in front of the empty chair...Is this really Keith, her father? " The intricate, gloomy and thought-provoking piece displayed above was created by the alternative artist Zak Smith. He has successfully attempted to address the universal theme of fear and has also excellently portrayed the inquisitive nature of humans. The subject matter consists of a suggestive male figure located in an ordinary living room. The figure seems to be somewhat exhausted as though returning home from a difficult journey. Zak Smith created the image with inspiration from a quotation found in Thomas Pynchon's "Gravity's Rainbow". It was his intention to display in great detail the literary prose found within its pages and due to this it portrays a deep sense of emotion and confusion as the young girl believes her father may have returned. It addresses fundamental social issues that many unfortunately encounter during their lifetimes. ...read more.

As the image successfully displays the imagery in the quote, I believe the design is in keeping with the content. Smith hasn't made use of any colours and instead has only incorporated black and white into his image. These contrast significantly, emphasizing the subject matter and creating essential tone and shading. The dominate black is eye-catching and vivid and is used effectively to create thick bold lines and include an exquisite amount of minor detailing. Smith's illustration consists of several organic forms creating intricately detailed furniture and figures. These forms link together, building a scene of eerie darkness and melancholy. Black lines and tones have brought a brilliant amount of detail and complexity into the piece and have pushed the forms into three-dimensional images with harsh and ragged edges. The harsh edges and deep tones have created a visual texture in the subject matters. The overall design of the work with its dark and unsettling atmosphere causes the viewer to become reasonably uncomfortable and questioning. Zak Smith simply used fine black ink to create this stunning success onto a white A4 page. ...read more.

This piece is rather eerie and melancholic and forces me to consider situations I have been in previously which have induced feelings of sadness. The sense of darkness and longing creates a mood and atmosphere which everyone will have encountered during their lifetimes when a family member has been sent away or lost. Nevertheless, the sense of re-connection from the quotation builds up hope and happiness. Like "Gravity's Rainbow" this may be related to soldiers at war. A close relative may be sent into battle and you experience deep longing for them. However, hope rises as you know soon they will return. Whilst creating the piece I believe Zak Smith may have been considering the link with the next page and quotation. This will allow him to build up the story in his mind, and from that either feel sadness, as the girl has been mistaken, or happiness as the relatives are finally re-united. The organic forms in this image create a depressing, dark and sad atmosphere. In my opinion, I believe this is a work of sheer brilliance and detail. Smith has been able to create a vivid and detailed piece with the use of only one quotation ?? ?? ?? ?? ...read more.