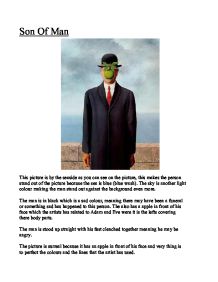 Son Of Man This picture is by the seaside as you can see on the picture, this makes the person stand out of the picture because the sea is blue (blue wash). The sky is another light colour making the man stand out against the background even more. The man is in black which is a sad colour, meaning there may have been a funeral or something sad has happened to this person. The also has a apple in front of his face which the artists has related to Adam and Eve were it is the lefts covering there body parts. The man is stood up straight with his fest clenched together meaning he may be angry. The picture is surreal because it has an apple in front of his face and very thing is to perfect the colours and the lines that the artist has used. Song Of Love This picture is by the sea side, the background is a blue sky with clouds and a ship that blends in with the sea by using the sea colours. At the front of the picture there are to fish like creatures talking to each other, They look like they are half human as well because they have human legs. The title may mean that the two human fish are singing with one another. The creatures have blended in with the rock they are sitting on making them not stand out that much, so it looks like the artist has tried too make them look like they have been sat there for a long time. ...read more.

This picture is surreal because houses don't grow any bigger and don't need water like a tree does through it root. Small Woods Where I Met Myself This picture is of woman standing around by a river. The picture is in black and white and is a photo picture. The river has a refection on the water of two of the woman stand by the bank of the river but the refection is a very white colour as are the trees in the picture. The background is many a grey colour but may be a field in the country side. The picture of the girls and the trees on the bank of the river are very well lighted from the side of them were the sunlight is coming from, and in the reflection on the river were the light parts on the bank are dark in the reflection. The dark of the picture makes them look spooky and staring at something on the other side of the bank. Masterwork The picture is black and white and a photography picture. The picture is of an office but has no roof on it. The sky has a little bit of breaking through the clouds and has made a small glare on the camera lens but may have been digital enhanced. The office it self is mostly made of wood given it a dull look to it. ...read more.