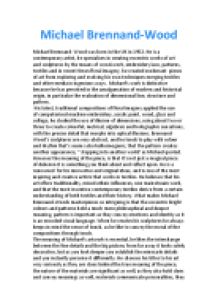 ﻿Michael Brennand-Wood Michael Brennand- Wood was born in the UK in 1952. He is a contemporary artist, he specializes in creating eccentric works of art and sculptures by the means of wood-work, embroidery lace, patterns, textiles and in recent times floral imagery, he created exuberant pieces of art from exploring and evolving his own techniques merging textiles and other media in ingenious ways. Michael?s work is distinctive because he has persisted in the amalgamation of modern and historical origin, in particular the evaluation of dimensional line, structure and pattern. His latest, traditional compositions of floral imagery applied the use of computerised machine embroidery, acrylic paint, wood, glass and collage, he studied the use of illusion of dimensions, using about two or three to create colourful, metrical, algebraic and holographic sensations, with the precise detail that morphs into optical illusions. Brennand-Wood?s sculptures are very abstract, and he tends to play with colour and rhythm that?s seems also hallucinogenic, that the pattern creates another appearance, ? stepping into another world? as Michael quoted. However the meaning of the piece, is that it?s not just a magical piece of delusion it is something you think about and reflect upon. He is a renowned for his innovative and original ideas, and is one of the most inspiring and creative artists that works in textiles. ...read more.

Michael Brennand-Woods piece of work reminds me of Rememberance Day, when the WW1 officially ended. Because the way the toy soldiers have been stacked upon one another makes it seem that they are dead corpses in a mud ditch. The bombs exploding out of the base, implies that the atmosphere was very chaotic and violent, also the small toy planes imply warfare as well, they give the sense that they are actually flying trying to flee from the explosion. In the middle there are a few flowers sprouting from the corpses, their shape reminds me of poppies, which are the emblem for Rememberance Day, many grew from the field in which many soldiers died fighting in the war, they are red and represent the blood spilled in WW1. There are also iron crosses, which are medals given to soldiers for their valour and bravery. The arrangement of the work is unusual because the way the soldiers are arranged makes a volcano shape, which has objects bursting from it, it is like a freeze-frame of a volcano erupting war. The way the bombs have been positioned it looks like they are being ejected and then the beautiful flowers shine through in the middle of all the carnage. Michael Brennand-Wood has split the work into sections because he wanted to draw your attention to each thing individually, first is the stack of soldiers which is big and has lots of dimensions in it, and it is also the base, where the eyes tends to start. ...read more.

Connected to the wheel are symbols that also look like the eight auspicious symbols of Buddhism. They are symbols used to help you in your path of enlightenment. Michael Brennand-Wood has split the work into sections because each layer is different and holds a different meaning. The first layer is beautiful floral design. The second layer in an intricate pattern that looks like paths, that can be translated into paths of life, that also interlocks with the chessboard type pattern on the corners, chess is all about decisions and options, which you will have to chose in life. The way the piece is displayed makes it appear like an optical illusion, as you trip upon, stumble through and fall through optical illusions of trickery and deception. The contrasting colours of red and navy, make it more difficult to discover the patterns and designs hidden beneath and the tiny complex display almost make you head ache. And also the use of using a square shape with a circle gives the piece dimension. To produce the piece the artist has used acrylic, fabric, card and metal. The element that intrigues me about this artists work is the symbols on the 3rd layer, they remind me of Buddhism symbols, but I do not specifically know, they interest me because I have never seen them before and they are unknown to me. ...read more.