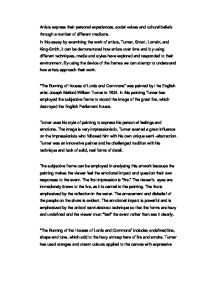 Artists express their personal experiences, social values and cultural beliefs through a number of different mediums.

Artists express their personal experiences, social values and cultural beliefs through a number of different mediums. In this essay by examining the work of artists, Turner, Smart, Lorrain, and King-Smith, it can be demonstrated how artists over time and by using different techniques, media and styles have explored and responded to their environment. By using the device of the frames we can attempt to understand how artists approach their work. "The Burning of Houses of Lords and Commons" was painted by the English artist Joseph Mallord William Turner in 1834. In this painting Turner has employed the subjective frame to record the image of the great fire, which destroyed the English Parliament house. Turner uses his style of painting to express his personal feelings and emotions. The image is very impressionistic. Turner exerted a great influence on the Impressionists who followed him with his own unique semi-abstraction. Turner was an innovative painter and he challenged tradition with his technique and lack of solid, real forms of detail. The subjective frame can be employed in analysing this artwork because the painting makes the viewer feel the emotional impact and question their own responses to the event. ...read more.

Smart uses his materials well to create an illusion of dark skies and shadows, which imply a haunting affect. From looking at this artwork it is obvious to the viewer that the Smart is very concerned with the composition of his paintings, as seen in the balance of shapes and areas of colour. Smart has responded to the urban environment in his painting and uses his technique and subject matter to share his feelings of isolation and loneliness in the modern society. "Landscape with Ascanius Shooting the Stag of Sylvia" was painted by the French artist Claude Lorrain in 1682. In this painting Lorrain has used aspects of the cultural frame, to express a certain cultural identity of Greek/Roman society, as well as the influence of Classicism on his style of painting. Claude Lorrain was inspired by the art movement 'Classicism', which refers to Greek and Roman art, with a sense of order and harmony, to display this traditional landscape in Greece in the 17th Century. Claude Lorrain in "Landscape with Ascanius Shooting the Stag of Sylvia" uses symbols of the ancient Greek society, to emphasize the strong influence of the classical movement of Ancient Greece and Rome on his art making. ...read more.

King-Smith is challenging social values, as she is searching for her identity amongst whites and blacks. She is challenging secular beliefs and is challenging power over authority. She also has challenged some traditional conventions, such as perspective and tonal modeling, all these techniques reinforce Leah King-Smith's main aim, which is to challenge societies values and the way society treats Aboriginal people today. Turner, Smart, Lorrain and King-Smith have all used their artworks to record their own personal messages. Turner has expressed his feelings about an event through his impressionistic technique and shared these with the viewer, through a compilation of colours, highlights and shadows. In comparison Smart has used his structured technique to express his feelings of isolation and loneliness in the urban environment. Lorrain has expressed cultural influences in his architectural ordered landscapes. King-Smith has used her artwork to comment on the plight of her ancestors in modern society. So it can be seen by looking at the artworks of Turner, Smart, Lorrain and King-Smith that these artists have used their work to express their feelings and ideas on issues that are important to them. They have responded in certain ways to share their personal experiences, social values and as a means of recording their cultural beliefs. ...read more.