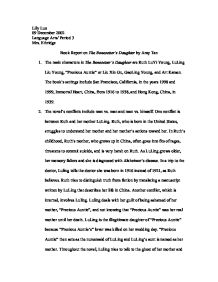 Book Report on The Bonesetter's Daughter by Amy Tan

Lily Luo 09 December 2002 Language Arts/ Period 3 Mrs. Ethridge Book Report on The Bonesetter's Daughter by Amy Tan 1. The main characters in The Bonesetter's Daughter are Ruth LuYi Young, LuLing Liu Young, "Precious Auntie" or Liu Xin Gu, GaoLing Young, and Art Kamen. The book's settings include San Francisco, California, in the years 1998 and 1999, Immortal Heart, China, from 1916 to 1938, and Hong Kong, China, in 1939. 2. The novel's conflicts include man vs. man and man vs. himself. One conflict is between Ruth and her mother LuLing. Ruth, who is born in the United States, struggles to understand her mother and her mother's actions toward her. In Ruth's childhood, Ruth's mother, who grows up in China, often goes into fits of rages, threatens to commit suicide, and is very harsh on Ruth. As LuLing grows older, her memory falters and she is diagnosed with Alzheimer's disease. In a trip to the doctor, Luling tells the doctor she was born in 1916 instead of 1921, as Ruth believes. Ruth tries to distinguish truth from fiction by translating a manuscript written by LuLing that describes her life in China. ...read more.

One is Chang the coffin maker, who Liu Xin describes, "The man's a brute, I'd rather eat worms that be his wife." The other is Baby Uncle, a handsome and caring man Liu Xin falls in love with. She is to marry Baby Uncle, but because she refuses Chang's offer, Chang kills Ruth's soon-to-be-husband and her father. This prompts her into attempting suicide by swallowing a pot of boiling black resin. However, she heals from this incident, although losing her ability to speak. Liu Xin gives birth to her daughter, LuLing, and although she is filled with grief for her husband and father, she loves LuLing with her all her heart and does not try to kill herself again to be with and take care of LuLing. As LuLing grows older, Liu Xin takes care of her as her nursemaid. LuLing grows to love her "Precious Auntie" but also grows to be ashamed of her because of her inability to talk and her gruesome scars marring her face from the incident years ago. When LuLing turns 14, however, she is to be wed to one of Chang's sons, but her mother strictly forbids this to happen. ...read more.

Art also realizes things about him in their separation, such as him being self-centered. As the couple learns these about themselves and their relationship, they finally repair their relationship and Ruth resolves her conflicts. 5. The theme of this novel is that is it is very important to acknowledge one's past and culture. This is the lesson of the story, to learn one's past and one's culture so that one can learn about oneself. This will forever remain with me, because I know that to understand my family and myself, I have to learn about my culture and why my family acts the way they do. 6. I can apply this message to myself by learning about my heritage and about the past of my family. I relate to the protagonist in this novel, Ruth, because my parents act similar to Ruth's mother and I also grew up with people of Chinese descent. My mother and father are also very criticizable of me like Ruth's mother. I also find myself to be somewhat distant from them and I do not understand them very well. If I learn about my heritage and my past, perhaps I can finally understand why they do the things that they do and not be embarrassed or distant to them. ...read more.