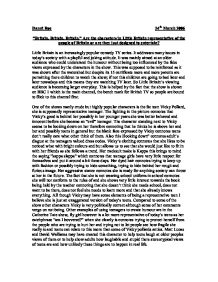 &quot;Britain, Britain, Britain.&quot; Are the characters in Little Britain representative of the people of Britain or are they just designed to entertain?

Danni Roe 24th March 2006 "Britain, Britain, Britain." Are the characters in Little Britain representative of the people of Britain or are they just designed to entertain? Little Britain is an increasingly popular comedy TV series. It addresses many issues in today's society with a playful and joking attitude. It was mainly aimed at an older audience who could understand the humour without being too influenced by the fake views expressed by the characters in the show. This was supposed to be reinforced as it was shown after the watershed but despite its 15 certificate more and more parents are permitting there children to watch the show; if not this children are going to bed later and later nowadays and this means they are watching TV later. So Little Britain's viewing audience is becoming larger everyday. This is helped by the fact that the show is shown on BBC 1 which is the main channel, the bench mark for British TV so people are bound to flick to this channel first. ...read more.

All though Vicky may have some elements of being a representative teen I believe she is just an exaggerated version of today's teens. Compared to some of the show other characters Vicky is very politically correct although some of her comments verge on not being. Other examples of using teenagers to create humour are in the Catherine Tate show, fly girl however is a lot more representative of today's teens as her catchphrase "am I bovvered?" when she clearly is connotes trying to protect herself from the people who are trying to hurt her and trying not to let people see how fragile she really is and teens can relate to this more than some of Vicky pollards antics. Matt Lucas and David Walliams may have created this character to help teens laugh at older peoples views of them or to help show adults how laughable and stupid there stereotypical views of teens are and how unlikely these things are to happen in real life. ...read more.

Little Britain is made up of idea's and people that like these ideas try to imitate this idea as closely as possible to gain the respect of other people that like these ideas. Although some art can imitate life on a more exaggerated level. For example well Vicky pollard imitates some teenage habits as we know some do steal, smoke, or possible have sex underage they are not doing this every single day without consequences like Vicky does (however there are a few very rare exceptions). Therefore life imitates art. Little Britain is just an exaggerated version of peoples faults or slightly abnormal points. Little Britain does entertain me as the humour and punch lines do work because they are so incredibly in your face that it has shock factor that makes people laugh. Before our media lessons and analysing the sketch and script more I thought very little of the some what controversial characters and there habits. But over the past few lessons it has helped me realise just how offensive Matt Lucas and David Walliams characters can really be. ...read more.