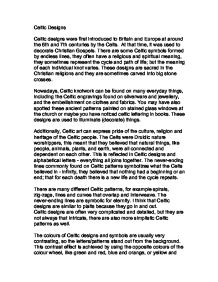 Celtic Designs. Celtic knotwork can be found on many everyday things, including the Celtic engravings found on silverware and jewellery, and the embellishment on clothes and fabrics.

Celtic Designs Celtic designs were first introduced to Britain and Europe at around the 6th and 7th centuries by the Celts. At that time, it was used to decorate Christian Gospels. There are some Celtic symbols formed by endless lines, they often have a religious and spiritual meaning, they sometimes represent the cycle and path of life; but the meaning of each individual knot varies. These designs are sacred in the Christian religions and they are sometimes carved into big stone crosses. ...read more.

things. Additionally, Celtic art can express pride of the culture, religion and heritage of the Celtic people. The Celts were Druidic nature worshippers, this meant that they believed that natural things, like people, animals, plants, and earth, were all connected and dependent on each other. This is reflected in Celtic designs and alphabetical letters - everything all joins together. The never-ending lines commonly found on Celtic patterns symbolizes what the Celts believed in - infinity, they believed that nothing had a beginning or an end; that for each death there is a new life and the cycle repeats. ...read more.

The colours of Celtic designs and symbols are usually very contrasting, so the letters/patterns stand out from the background. This contrast effect is achieved by using the opposite colours of the colour wheel, like green and red, blue and orange, or yellow and purple. It seems like colours such as emerald green, gold, yellow, red and blue are popular colours used for the designs - especially green, it is probably because it represents nature. I have noticed that most celtic designs use mainly primary and secondary colours. Celtic designs that have been inspired by the ancient Celts have passed on for generations and still exist in the world we live in today! ...read more.