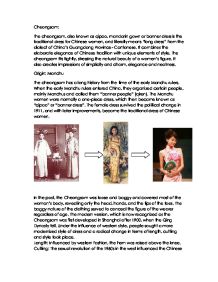 Cheongsam: The cheongsam, also known as qipao, mandarin gown or banner dress is the traditional dress for Chinese women, and literally means "long dress" from the dialect of China's Guangdong Province- Cantonese. It combines the elaborate elegance of Chinese tradition with unique elements of style. The cheongsam fits tightly, stressing the natural beauty of a women's figure. It also creates impressions of simplicity and charm, elegance and neatness. Origin: Manchu The cheongsam has a long history from the time of the early Manchu rulers. When the early Manchu rulers entered China, they organized certain people, mainly Manchus and called them "banner people" (qiren). The Manchu women wore normally a one-piece dress, which then became known as "qipao" or "banner dress". ...read more.

Under the influence of western style, people sought a more modernized style of dress and a radical change in terms of length, cutting and style took place. Length: Influenced by western fashion, the hem was raised above the knee. Cutting: The sexual revolution of the 1960s in the west influenced the Chinese society as women began to show their arms and legs when they wore their Cheongsam. Material: The Cheongsam is usually made of materials such as silk, silk brocade, satin, satin brocade or velour's. Design: The Chinese women believed that what they wore had to display elegance, in addition to magnificence and nobility. The design of the Cheongsam depicts the maturity of women. ...read more.

It also signified the freedom of the Chinese women as they were forbidden to expose their legs in the past. Sleeves: The cheongsam can be sleeveless, short, medium or full length, depending on personal taste. Buttons: The dress is buttoned on the right side, with a loose chest. Pattern: In Chinese dress, different patterns have symbolic meanings. Peony- richness and prosperity Lotus- sacred flower Chrysanthemum-longevity Fish-prosperity Dragon- Supreme power Color: Like the patterns, the colors had symbolic meanings. Red- good luck, happiness, joy *used for brides as they believed that they were energetic, and this symbolized fire. Yellow- It was the traditional color used for imperial service Blue- immortality Blue & Green- symbols of Spring Black- color used for young boys as it symbolized a beginning. White- symbolized the end, and was worn on sad occasions. http://www.cheongsamboutique.com/cheongsam.jpg http://www.inmagine.com/z198170/z198170032-photo http://www.inmagine.com/z198170/z198170056-photo http://www.fotosearch.com/GSH485/gs349057/ http://www.lightinthebox.com/Mandarin-Collar-Sleeveless-Knee-length-Silk-Cheongsam---Qipao---Chinese-Dress--HGQP095-_p44425.html ...read more.