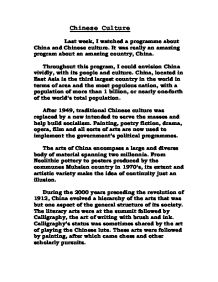 Chinese Culture Last week, I watched a programme about China and Chinese culture. It was really an amazing program about an amazing country, China. Throughout this program, I could envision China vividly, with its people and culture. China, located in East Asia is the third largest country in the world in terms of area and the most populous nation, with a population of more than 1 billion, or nearly one-forth of the world's total population. After 1949, traditional Chinese culture was replaced by a new intended to serve the masses and help build socialism. Painting, poetry fiction, drama, opera, film and all sorts of arts are now used to implement the government's political programmes. The arts of China encompass a large and diverse body of material spanning two millennia. ...read more.

If we move to the art of painting we find out that the earliest known examples of Chinese painting date from the Han dynasty (202 BC-220 AD) when the walls of temples and official halls were often painted with murals. Almost none of the early mural paintings survive, however, except for some within cave temples and on the walls of tombs chambers. These, I find as really impressive as they were shown on the programme. Their style is closely related to the sculptural tomb relief of the period. Another craft in China, which impressed me a great deal, is that of wearing silk. This was a distinctive craft in China as early as the Shag dynasty. From the Han dynasty the great overland trade routes that linked the Mediterranean countries with China were founded on and other products of the Chinese artisan. ...read more.

These formed the basis of such superb novels as the anonymous "Chin Ping Mei" (1582-96) translated as "The Golden Lotus". Fiction shaved the influence of Chinese tradition and culture. If we move to Chinese music we find a diversity of Chinese musical forms. This diversity mirrors that of musical audience and of the situations in which music plays a role. Chinese music has ancient roots. It flourished as an art in the shag dynasty after the 14th century BC, and its origins were surely earlier. Though remarkable for its stagnant and has all the variety and richness to be expected in the art of a vast, ancient, and populous land. Discussion of Chinese culture is endless as it reflects an enchanting world of beauty and art. That is why I have recorded the programme and I will always cherish it in my videotape library. ...read more.