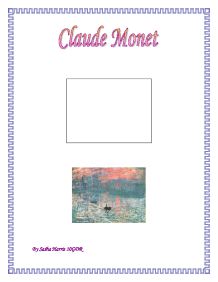 By Sasha Harris 10GDR Claude Monet is regarded as one of the most famous impressionist artists. He was an artist in the impressionist movement which originated in paris and started in the late 19th century.When he settled in Argenteuil he painted many canvasses from the banks of the Sceine including the canvas red boats, Argenteuil. Claude Monet was a French impressionist painter who was born on November 14, 1840 in Paris, France. He spent his childhood in Le Havre, this is where he first became known for his caricatures and drawings. Through an exhibition of his caricatures in 1858, Monet met Eug�ne Boudin, a landscape painter, who became a large influence on Monet. Boudin introduced him to outdoor painting, which became the basis for his work. ...read more.

Name of work: Red boats, arguentile The country where the artist lived: Claude Monet created this canvas at the banks of the Seine at Argenteuil Name of artist: Claude Monet When the work was made: 1875 In this work by Monet, the intense rust-red of the boats in the centre/middleground of the work is emphasized against the harmony of the blue water, sky and the subtle green of the plants floating along the top of the calm ripples of the water. There are numerous vertical, inorganic lines mainly used for the masts as well as organic lines. The texture and tone found in the clouds allow them to appear fluffy, light and soft. Different textures are found throughout the whole painting where different brush strokes (mainly short) ...read more.

The secondary focal point may be the part of the green and white rowboat in the foreground. This work was painted because Monet was seeking to capture the fleeting changes in the glinting play of air and light. In order for him to observe the effects of sunlight more closely, he worked from a boat turned into a studio. There is no particular message that is expressed or conveyed from this artwork. Monet is successful in capturing the effects of light on a canvas, the style of painting suits what Claude Monet was trying to achieve because impressionism is a form of art that tries to create visual reality. My favorite parts of the artwork are the two rust-red boats in the middleground of the work because they stand out and I like the way that they are reflected onto the tranquil water. Title: Red boats, Argenteuil Artist: Claude Monet Media: oil on canvas Year: 1875 ...read more.