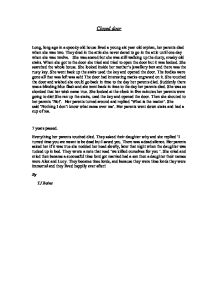 Closed door Long, long ago in a spooky old house lived a young six year old orphan, her parents died when she was two. They died in the attic she never dared to go in the attic until one day when she was twelve. She was scared but she was still walking up the dusty, creaky old stairs. When she got to the door she tried and tried to open the door but it was locked. She searched the whole house. ...read more.

There was a dead silence. Her parents asked her if it was true she nodded her head slowly, later that night when the daughter was tucked up in bed. They wrote a note that read 'we killed ourselves for you '. She cried and cried then became a successful time lord got married had a son then a daughter their names were Alex and Lucy. They became time lords, and because they were time lords they were immortal and they lived happily ever after! By TJ Bains ...read more.