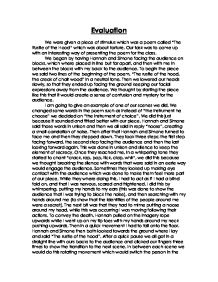 Come up with an interesting way of presenting the poem for the class - The Rustle of the Hood.

Evaluation We were given a piece of stimulus which was a poem called "The Rustle of the Hood" which was about torture. Our task was to come up with an interesting way of presenting the poem for the class. We began by having Hannah and Simone facing the audience on blocks, which where placed in line but far apart, and then with me in between the blocks with my back to the audience. To begin the piece we said two lines of the beginning of the poem, "The rustle of the hood, the creak of chair wood" in a neutral tone. Then we lowered our heads slowly, so that they ended up facing the ground keeping our facial expressions away from the audience. We thought by starting the piece like this that it would create a sense of confusion and mystery for the audience. I am going to give an example of one of our scenes we did. ...read more.

While they where doing this, I had to act as if I had a blind fold on, and that I was nervous, scared and frightened. I did this by whimpering, putting my hands to my ears (this was done to show the audience that I was trying to block the noise), and then searching with my hands around me (to show that the identities of the people around me were a secret). The next bit was that they had to mime putting a noose around my head, while this was occurring I was moving following their actions. To convey the death, Hannah pulled on the imagery rope upwards while I went up on my tip toes with my hands around my neck pushing upwards. Then in a quick movement I had to fall onto the floor. Hannah and Simone then both looked towards the ground where I lay and said "The rustle of the hood". ...read more.

We used a lot of repeation through out our piece such as "the instrument of choice" (this changed from the noose for me, to the spear for Hannah and the Whip for Simone). Though the repeation was effective to some extent, I think if we had to improve it I would have used a few more drama techniques and think of other clever ways of showing our thoughts. Everyone got a fair part because we split the top half of the poem into three sections and the other words where shared out. I also think by not using the whole poem and changing the words around or using selected words made it less boring and less predictable. We used levels by using blocks to show that the torturers were higher up and the one being tortured lower down. We used the element of mystery from the poem throughout our piece. Things such as who were these people? Why were they doing this? Why more than one person? The most important of them all was why the secrecy? Maybe because this wasn't permitted. ...read more.