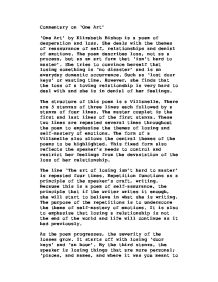 Commentary on 'One Art'

Commentary on 'One Art' 'One Art' by Elizabeth Bishop is a poem of desperation and loss. She deals with the themes of reassurance of self, relationships and denial of emotions. The poem describes loss, not as a process, but as an art form that 'isn't hard to master'. She tries to convince herself that losing something is 'no disaster' and is an everyday domestic occurrence. Such as 'lost door keys' or wasting time. However, she finds that the loss of a loving relationship is very hard to deal with and she is in denial of her feelings. The structure of this poem is a Villanelle. There are 5 stanzas of three lines each followed by a stanza of four lines. ...read more.

It is also to emphasise that losing a relationship is not the end of the world and life will continue as it had previously. As the poem progresses, the severity of the losses grow. It starts off with losing 'door keys' and 'an hour'. By the third stanza, the speaker is losing things that are more personal; 'places, and names, and where it was you meant to travel.' In the fourth stanza, she loses her 'mother's watch'. This is an artifact of sentimental value. She then loses 'three loved homes'. Her choice of words here was very careful in that the word 'home' was used rather than 'house'. A house is just a building, but the word 'home' has warm and loving connotations. She then 'lost two cities', 'realms' and even 'a continent' in the fifth stanza. ...read more.

In the fourth stanza, the exclamation mark used in 'And look!' shows an intense expression of emotions. It has a cathartic effect on the readers. The second exclamation mark has an alternate effect. Instead of releasing emotions, she is using '(Write it!)' as a way of forcing herself to use her craft to control her emotions. She is using writing as an art form to express something important in her life. It is almost as if she can write it, then she will have the will power to exercise it and believe that it is really 'no disaster'. 'One Art' may seem to be a very simple poem but it has deeper meaning. It is an agonized attempt by the poet to convince herself that the end of a relationship is not a big issue. After reading this poem, the sympathy and empathy felt for the situation of the poet is absolute. ...read more.