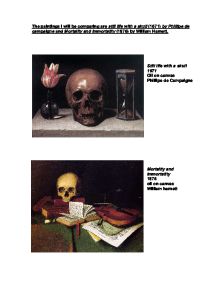 comparison of still life with a skull (1671) by Phillipe de campaigne and Mortality and Immortality (1876) by William Harnett.

The paintings I will be comparing are still life with a skull (1671) by Phillipe de campaigne and Mortality and Immortality (1876) by William Harnett. Still life with a skull 1671 Oil on canvas Phillipe de Campaigne Mortality and Immortality 1876 oil on canvas William harnett First impressions: When I first look at Champaigne's piece of work, I see the skull dominating the centre of the image, looking at me. The image makes me think about death, as the skull seems to be watching the viewer - awaiting their death. What is strange however is the flower beside the skull. Harnett's painting howevr is somewhat different; at first sight, I see more to the image than just a skull. Basic elements: The colours used in both paintings however are quite similar in that darker hues are used to create a dark 'deathly' atmoshphere. The colours used in harnett's painting are slightly warmer than Champaigne's painting; both however used contrasting hues to create visually striking depictions. The light has been effectively exploited to aid in this. The texture of Campaigne's painting seems quite rough whilst Harnett's seems smoother, this is because the way the paints have been used in Harnett's work create a smoother feel. ...read more.

Materials and techniques: Both paintings have been done using oil on canvas. The paint has been used precicisely to achieve a realistic still life image. Composition: I think both paintings have been carefully planned; I believe this because of the effective use of overlapping created which surely cannot be by chance as it serves a real purpose. Although campaigne's painting is somewhat simpler compositionally as there's less in the painting, the skull has purposefully been placed in the middle and the flower symbolising life to its left and the timer to its right. This is no accident as I believe Campaign did this purposefully to challenge life and death. Harnett's painting makes much more use of overlapping, with books towards the front overlapping other books behind them on which the notorious skull stands. The pages are flickering as if to suggest life within this deathly painting. The violin is pointing towards the skull; it brings us into the painting from the foreground and leads us to the midground where the skull stands and disappears into the darkness of the background. ...read more.

So there are to major contradictoy themes fighting against each other. The timer also emphases the struggle for life and the approaching death in Campaigne's painting. In my work, iam also using evryday objects to show my identity - objects that are normal to me. Howver I have also contempated incorporating a skull to evoke a feeling of death. The book in harnett's painting is also an object which I might implemnet into my 'identity' work; Interestingly the book iam planning to implement within my composition has an illustration of a skull with cross bones - its title is 'double or die' and its these contributing aspects of the book which fit into one of my themes; death. I have also thought of icorporating the 'time' theme through a clock. I also have an illustration of a skull on a book of mine which iam thinking of implemeting somewhere within my final composition. Evaluation: I personally found these works very striking and interesting as they portrayed life and death very well. I would add more objects to Campaigne's painting as there's a lack if of overlapping to create a sense of real depth. If I could ask both artists a question, I would ask them both what is the significance of the skulls in both paintings. ...read more.