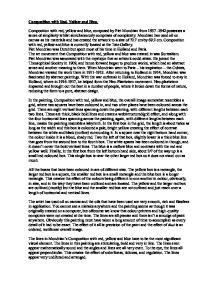 Composition with red, yellow and blue, composed by Piet Mondrian from 1937-1942 possesses a sense of simplicity whilst simultaneously comprises of complexity.

Composition with Red, Yellow and Blue. Composition with red, yellow and blue, composed by Piet Mondrian from 1937-1942 possesses a sense of simplicity whilst simultaneously comprises of complexity. Mondrian has used oil on canvas as his materials and has created the artwork to a size of 72.7 cm by 69.2 cm. Composition with red, yellow and blue is currently located at the Tate Gallery. Piet Mondrian was Dutch but spent most of his time in Holland and Paris. The art movement that Composition with red, yellow and blue was created in was Surrealism. Piet Mondrian was associated with the mystique that an artwork could attain. He joined the Theosophical Society in 1909, and hence forward began to produce works, which had an abstract sense and another meaning to them. When Mondrian went to Paris - his inspiration - the Cubists, Mondrian viewed the work there in 1911-1913. After returning to Holland in 1914, Mondrian was fascinated by abstract paintings. With the war outbreak in Holland, Mondrian was forced to stay in Holland, where in 1916-1917, he helped form the Neo-Plasticism movement. Neo-plasticism impacted and brought out the best in a number of people, where it broke down the forms of nature, reducing the form to a pure, abstract design. ...read more.

To the eye, the lines all appear perpendicular. This creates the effect of orderliness, tidiness, and regulation. The lines appear very undiluted and arranged. The direction of the painting is very simple to figure out, as the lines in the painting lead only horizontally and vertically, which means that there are two directions in the painting, and they are all the points on a compass. The lines basically lead north, south, east and west, a result of the structured line system that Mondrian has taken up. The shapes in the painting again, appear very mathematical and accurate. All the shapes consist of right angles and parallel lines. We can see that there are no triangles or parallelograms in the painting. Each and every aspect of this painting is again, very rectilinear. The yellow square in the image takes up about 1/30 of the image, while the red square does about the same thing. The blue rectangle takes up a very minimal amount of space and even more so - the single red square. Again, each shape ranges in size. To me, since the blue is such a strong colour, the painter has limited its size, and since yellow is such a light colour, the artist has placed it in isolation, so it attracts more attention. ...read more.

Because the lines and colours are all so unevenly spaced out, it appears any second now that the lines will just fly off in whatever direction they came in. Besides that, there seems to be no evidence of movement or rhythm in the image. I particularly like the image as it is so simple and simple things to me are really beautiful in their own way. This artwork is unique because it is unlike any other painting I have ever seen before. This image comprises of so much, while only possessing so little, but at the same time doing so with perfection. Since the artwork is so abstract, and the image could have originally been a picture of a park, I would not know what Mondrian was trying to communicate, but I know that the object Mondrian was drawing was either really complicated or really simple, like the artwork. This artwork has got to be one of my favourites. I like it because of its simplicity and complexity (mentioned a lot before). I like the fact that this painting is abstract yet at the same time revealing so much about anything. I guess it's a matter of letting your imagination run wild. ...read more.