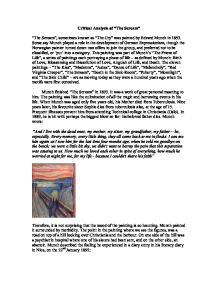 Critical Analysis of "The Scream" "The Scream", sometimes known as "The Cry" was painted by Edvard Munch in 1893. Some say Munch played a role in the development of German Expressionism, though the Norwegian painter turned down two offers to join the group, and preferred not to be classified, or 'put' into a category. This painting was part of Munch's "The Frieze of Life", a series of paintings each portraying a phase of life - as defined by Munch: Birth of Love, Blossoming and Dissolution of Love, Anguish of Life, and Death. The eleven paintings - "The Kiss", "Madonna", "Ashes", "Dance of Life", "Melancholy", "Red Virginia Creeper", "The Scream", "Death in the Sick-Room", "Puberty", "Moonlight", and "The Sick Child" - are as moving today as they were a hundred years ago when the motifs were first conceived. Munch finished "The Scream" in 1893. It was a work of great personal meaning to him. The painting was like the culmination of all the tragic and harrowing events in his life. When Munch was aged only five years old, his Mother died from Tuberculosis. Nine years later, his favourite sister Sophie dies from tuberculosis also, at the age of 15. Frequent illnesses prevent him from attending Technical college in Christiania (Oslo). In 1889, he is hit with perhaps the biggest blow so far: his beloved father dies. ...read more.

The painting is almost a self-portrait. One could say that the screaming figure was a representation of Munch, and it would be partly true, but I feel that the figure is not really a representation of anything visible, or human, instead it represents a sound, in this case a terrifying scream that came as much from inside munch as from his surroundings. The figure is neither male, nor female. It is asexual, maybe a reflection of the way he is feeling after the breakdown of his relationship. When art historians call Munch, together with artists like Van Gogh, "the founder of Expressionism", it is because of a picture such as The Scream. The work depicts not so much an incident or a landscape as a state of mind. The drama is an inner one, and yet the subject is firmly anchored in the physical surroundings of Oslo - the view is from Nordstrand towards the two bays at the head of the Oslofjord, with Holmenkollen in the background. The evening landscape, painted as an abstract rhythm of wavy lines, broke the Victorian mould of very beautiful, realistic sunsets. Munch confirms, in his writings, how to paint means to remember; and thus he always affirmed that things must be painted the way we see them, and not the way they are, to paint according to our moods, "to the moment of the day", to our mind's needs. ...read more.

When it was exhibited, "The Scream" didn't meet with public demand, and so was not at all popular. Munch was very upset by this, and moved to Berlin, where his work was found to be more acceptable. In Germany, he influenced two German expressionist groups, Die Br�ke and Die Blaue Reiter. He had two offers from Die Blaue Reiter to join them, but he turned both down. Painting was for Munch a personal experience, and he did not like to share it, or put his works into any grouping. The painting itself looks quite 'slapdash', as though it was rushed. The thick streaks of oil paint give the effect of a movement blur, like the world was swirling around the figure. It is hard to distinguish between the water and the land, difficult to recognize where the hills in the background stop and the sunset begins. "The Scream" is a painting full of emotion, full of character not understood at the time of its birth. It reflects Munch's life at that time, all the Death and anxiety that makes the painting so mysterious and haunting, whilst also lively. When I look at it, I feel I can hear the scream echoing from it. The screaming figure draws the attention of the onlooker, but other aspects of the painting are just as interesting. Whilst we cannot know what was going through Munch's mind when he painted"The Scream", we can guess that the painting evokes all the pain he was feeling. ...read more.