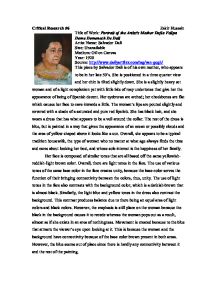 Critical research. This piece by Salvador Dali is of his own mother, who appears to be in her late 50s. She is positioned in a three quarter view and her chin is tilted slightly down.

Critical Research #6 Zakir Hussain Title of Work: Portrait of the Artist's Mother Dofia Felipa Dome Domenech De Dali Artist Name: Salvador Dali Size: Unavailable Medium: Oil on Canvas Year: 1920 Source: http://www.dailyartfixx.com/tag/van-gogh/ This piece by Salvador Dali is of his own mother, who appears to be in her late 50's. She is positioned in a three quarter view and her chin is tilted slightly down. She is a slightly heavy set woman and of a light complexion yet with little bits of rosy undertones that give her the appearance of being of Spanish decent. Her eyebrows are arched; her cheekbones are flat which causes her face to cave inwards a little. The woman's lips are pouted slightly and covered with a shade of a saturated and pure red lipstick. ...read more.

Overall, there are light tones in the face. The use of various tones of the same base color in the face creates unity, because the base color serves the function of their bringing connectivity between the colors, thus, unity. The use of light tones in the face also contrasts with the background color, which is a darkish-brown that is almost black. Similarly, the light blue and yellow tones in the dress also contrast the background. This contrast produces balance due to there being an equal area of light colors and black colors. However, the emphasis is still place on the woman because the black in the background causes it to recede whereas the woman pops out as a result, almost as if she exists in an area of nothingness. ...read more.

Thus, I think his piece was made when he heard of her diagnosis; this painting depicts her hopeful perseverance over the dark void that follows her (the dark background). The blue around her chest figuratively represents clouds, as if to represent that god is with her and the hopefulness that his mom will overcome the cancer, similarly, asserting how he "worshipped her" and see her as an angel or any other symbol of divinity. I think this was a successful piece, in the sense that even at a young age Dali was able to included surrealist elements that cause the reader to think and interpret in multiple ways, such as the dress, that can also be seen as an ocean or heaven. I also found it successful because of the use of different values in the face to create for and give it a sense of realism. ...read more.