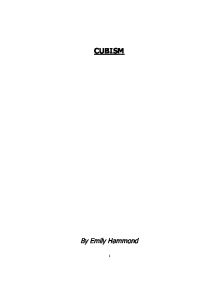 Cubism - a movement in modern art.

CUBISM By Emily Hammond Cubism was originally a movement in modern art, especially in painting. Cubism started in France and played an extremely important role in modern art. Before the twentieth century, art was recognised as an imitation of nature. Paintings and portraits were made to look as realistic and three-dimensional as possible, as if seen through a window. Artists were painting in a flamboyant style, but French postimpressionist Paul C�zanne, flattened still life images. In 1906 C�zanne held an exhibition of his paintings in Paris which Picasso visited, After seeing C�zannes work he began experimenting with C�zannes ideas. The actual movement of cubism was stared by Picasso and Braque, aimed at establishing this new plastic order which was completely different to the one that existed up to that time, it brought a great revolution in visual representation. It had a wide spread, tremendous influence on art following it but it did not come out from no-where. Early in the 20th century, Europe was in many senses at a great turning point and art movements were appearing one after another all over the continent, for example Fauvism in France (a forerunner of cubism) expressionism in Germany, and Futurism in Italy. It's not hard to say that this spirit of innovation had been evolving from half way through the 19th century. ...read more.

Again in this same year Gleizes, Meltzing, Leger, Lhote, Jaques Villon, Marcel Duchcamp, La Fresnaye, and La Fauconnier exhibited their works at the salon d'Automne, embroiling positive and negative opinions in feverent debate. As Braque and Picasso did not participate greatly in the Salons of Paris, the term cubism came into general use through these great exhibitions. There are considerable differences in nuance between Braque and Picasso on one hand and the other artists on the other, but each artist saw cubism through their individual methods, by departing from traditional visual senses, and by overlapping planes, piling and dividing them into massive multi-surface fragments. Picasso and Braque again entered a new phase in 1912. The extremely suppressed colours began to regain their richness, and the shape of the objects became easier to recognise again. Braque painted grain of wood in the Trope-l'oeil style, and both Picasso and Braque began each on his turn to experiment with the papier colle by pasting already printed paper onto canvas. This invention of papier colle seemed to have been in order to introduce a new sense of material into Cubistic painting, but the collage that developed from papier colle, caused the introduction of several concrete items onto the surface of the canvas and opened to a completely new realm in art. It is also widely known that collage is broadly linked with contemporary art. ...read more.

Braque's famous saying, " senses deform, and the spirit forms" expresses this directly. At the same time, Cubism is a new form of realism from the standpoint of its attempt from the reality of the object within the mind, and its distinction from the abstract art also lies in this point. Pablo Picasso Demoiselles D'Avignon 1906: This was to be considered as the first cubist painting. Painted by Picasso it was influence C�zannes "Bathers". It shocked those who first saw it. The figures are distorted, Faceted and fractured, three have faces like crude African masks, and two are like primitive African sculptures. The figures are flattened and there is no depth in the canvas. Paul C�zanne - Bathers 1897: This painting challenged and inspired Picasso to paint Demoiselles D'Avignon. Funerary Figure Bakota, Gabun, F.E.A 18" high, an exampe of African Negro sulptures Braque - Le Jour After World War I, in which he was badly wounded, Braque veered away from the angularity of early cubism and developed a more graceful, curvilinear style, predominantly painting still life. His works showed restraint and subtlety both in design and colour. Two Birds Examples of picassos work after Cubism (left to right) Figure in red chair, The Yellow Belt, Seated woman, Seated bather Bibliograpghy Microsoft encarta The Guiness encyclopedia www.cubistca.com notes provided www.global-gallery.com 1 1 ...read more.