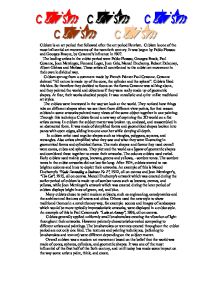 Cubism is an art period that followed after the art period Fauvism. Cubism is one of the most influential art movements of the twentieth century. It was begun by Pablo Picasso and Georges Braque, by Cezanne's influence in 1907.

Cubism is an art period that followed after the art period Fauvism. Cubism is one of the most influential art movements of the twentieth century. It was begun by Pablo Picasso and Georges Braque, by Cezanne's influence in 1907. The leading artists in the cubist period were Pablo Picasso, Georges Brack, Paul Cezanne, Jean Metzinger, Fernand Leger, Juan Gris, Marcel Duchamp, Robert Delaunay, Albert Gleizes and Matisse. These artists all contributed to the cubist art movement in their own individual way. Cubism sprung from a comment made by French Painter Paul Cezanne. Cezanne claimed "All nature is made up of the cone, the cylinder and the sphere". ...read more.

It was made of simplified forms and geometrical shapes broken into panes with open edges, sliding into one another while denying all depth. In cubism artist used angular shapes such as triangles, polygons, squares, and rectangles. Also artists simplified what they saw and what they were illustrating in geometrical forms and cylindrical forms. The main shapes and forms they used overall were cones, cubes and spheres. They pictured the world as a jigsaw of geometric shapes and combined these together to create their artworks. The colours cubists used varied. Early cubists used mainly greys, browns, greens and yellows, - sombre tones. The sombre tones in the cubist artworks did not last for long. ...read more.

An example of this is Paul Cezannes's "Lake at Annecy", 1896, oil on canvas. Cubists generally applied uniformly small brushstrokes creating the vibration of light throughout their artworks. However painterly characteristics varied comparing to different artists and paintings. The brushstrokes or textures created throughout the cubist period are not only one kind. The textures and painting techniques, (referring to brushstrokes and texture) were different depending on the subject matter. Overall cubism was a modern art movement based on the belief that the world was made of cones, spheres, cylinders, and geometric shapes. It was one of the most influential of the first half of the 2oth century, and until today has made some impact on the way some artist s paint, think, and create. ...read more.