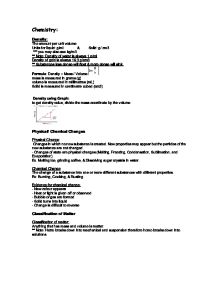 Chemistry: Density: The amount per unit volume Units for liquid: g/ml & Solid: g/ cm3 *** you may also see kg/m3 ** Note: Density of water is always 1 g/ml Density of gold is always 19.3 g/cm3 ** Substances less dense will float & more dense will sink. Formula: Density = Mass / Volume mass is measured in grams (g) volume is measured in millimetres (mL) Solid is measured in centimetre cubed (cm3) Density using Graph: to get density value, divide the mass coordinate by the volume. Physical/ Chemical Changes Physical Change: Changes in which no new substance is created. New properties may appear but the particles of the new substance are not changed. - Changes of state are physical changes (Melting, Freezing, Condensation, Sublimation, and Evaporation). Ex. Melting ice, grinding coffee, & Dissolving sugar crystals in water. Chemical Change: The change of a substance into one or more different substances with different properties. Ex: Burning, Cooking, & Rusting. Evidence for chemical change: - New colour appears - Heat or light is given off or observed - Bubble of gas are formed - Solid turns into liquid - Change is difficult to reverse Classification of Matter Classification of matter: Anything that has mass and volume is matter. ...read more.

Galaxy: A large huge collection of gas, dust, and hundreds of millions of stars and planet. Solar System: The Sun and all the objects that travel around it, including the nine known planets and the moons of those planet. Star: A large collection of matter that emits huge amounts of energy. Planet: A large piece of matter, generally spherical, that revolves around a star. Comet: A chunk of ice and dust that travels in a very long orbit around the sun. Meteor: A bright streak light across the sky caused by a meteoroid. Moon: Is a natural satelliet that moves around a planet. Sunspot: Is a region on the Sun's surface that is cooler than the surrounding areas Solar Flares: Is a massive explosion at the surface of the sun. Rotation and Revolution Rotation: Spinning of an object around it's own axis. -> One rotation of the Earth takes 24 hr = to 1 day -> The axis of the Earth is tilted at an angle of 23.5 degree Revolution: Is one complete orbit of an object around the Sun, a journey of one year. -> It takes for the Earth to revolve once around the Sun about 365.25 days. -> Where ever the axis is tilted at the Sun thats what seasons it is for that part of the hemisphere. -> When the northern hemisphere is tilted toward the sun, this creates summer in the northern hemisphere. Moon Phases Solar Eclipse Lunar Eclipse ...read more.