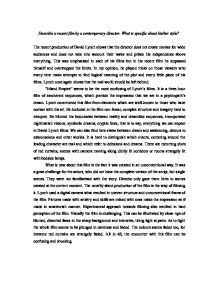 Describe a recent film by a contemporary director. What is specific about his/her style?

Describe a recent film by a contemporary director. What is specific about his/her style? The recent production of David Lynch shows that the director does not create movies for wide audiences and does not take into account their tastes and prizes his independence above everything. This was emphasised in each of his films but in his recent film he surpassed himself and overstepped the limits. In my opinion, he played tricks on those viewers who every time make attempts to find logical meaning of the plot and every little piece of his films. Lynch once again shows that the real world should be left behind. "Inland Empire" seems to be the most confusing of Lynch's films. It is a three-hour film of incoherent sequences, which provide the impression that we are in a psychopath's dream. Lynch constructed this film from elements which are well-known to those who have contact with his art. He included in the film non-linear, complex structure and imagery hard to interpret. He blurred the boundaries between reality and dreamlike sequences, incorporated nightmarish visions, symbolic dreams, cryptic lines, that is to say, everything we can expect in David Lynch films. We can also find here states between dream and awakening, detours to subconscious and other worlds. ...read more.

Certain kind of lighting, strange threatening shadows and combination of light and shade are crucial to exploration of the recurrent, surrealistic motif of the duality of world, subconscious and dark things hidden within people. Lynch's perception of world in light and darkness is exposed in decay and horror hidden under the surface of unnaturally bright colours of skies, flowers, and freshly trimmed grass. Such surrealistic vision of world has its roots in Lynch's childhood discoveries about surroundings. He mentions that his childhood was "picket fences, blue skies, red flowers, and cherry trees - but then I would see millions of little ants swarming on the cherry tree, which had pitch oozing out of it." (Internet Source 1) In numerous interviews Lynch states that he never believed in the peaceful, lovely world of these white picket fences and he shows what might happen beneath the surface and at his neighbours houses. As nobody believes him, he does that in a exaggerated form. Also, the great influence on Lynch's repetitive motif of darkness and horror had his encounters with big cities, what he mentions in a book "Widze siebie". He states that "Philadelphia, more than any filmmaker, influenced me. It's the sickest, most corrupt, decaying, fear-ridden city imaginable." ...read more.

When discussing features of Lynch's characters it is also worth to add that Lynch also shows in his films deformities and disabilities. Appearances of deformed and physically disabled people recur in many of his films including the deformed Baby in 'Eraserhead', disfigured Merrick in 'Elephant Man', One Armed Man with one amputated arm in 'Twin Peaks' and Juana with one shorter leg wearing leg braces in 'Wild at Heart'. Lynch's style also incorporates intertextuality, which plays an important role in his films. His films include borrowings and quotations from other films and references to other artists. A good illustration are references to the 'The Wizard of Oz' film. In 'Blue Velvet' Dorothy Vallens and her pair of high-heeled shoes resemble magic ruby slippers of Dorothy, the leading character from 'The Wizard of Oz'. More visuals and quotations from the 'The Wizard of Oz' are incorporated in 'Wild at heart'. The list of references is long here. We can find here observation of events in crystal ball, appearance of a Good Witch, images of Lula's mother on broomstick, which refer to the Wicked Witch. Also, the scene where Lula, after being abused by Bobby Peru, clicks her red shoes like Dorothy from 'The Wizard of Oz, who clicked her ruby slippers when she wanted to return home. ...read more.