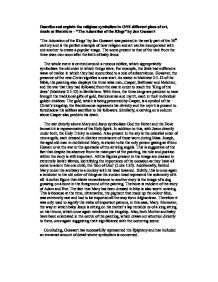 Describe and explain the religious symbolism in ONE different piece of art, music or literature - 'The Adoration of the Kings' by Jan Gossaert

Describe and explain the religious symbolism in ONE different piece of art, music or literature - "The Adoration of the Kings" by Jan Gossaert 'The Adoration of the Kings' by Jan Gossaert was painted in the early part of the 16th century and is the perfect example of how religion and art can be incorporated with one another to create a popular image. The scene present is that of the visit from the three wise men soon after the birth of baby Jesus. The whole event is centred around a ruinous edifice, which appropriately symbolises the old order in which things were. ...read more.

Similarly, a carving on a column above Casper also predicts his death. The star directly above Mary and Jesus symbolises God the Father and the Dove beneath it is representative of the Holy Spirit. In addition to this, with Jesus directly under both, the Holy Trinity is created. Also present in the sky is the celestial order of nine angels, each dressed in clothes reminiscent of those worn during Mass. Joseph, the aged old man in red behind Mary, is shown to be the only person gazing as if into Heaven or at the star or the spectacle of the arriving angels. ...read more.

The fact that Mary has been dressed in blue is also worth noticing. This is because at the time, ultramarine, the pigment that made up the colour blue, was extremely rare and had to be imported all the way form Afghanistan. Therefore it was only used to signify the value of important patrons, in this case, Mary. Moreover, the way in which baby Jesus is sitting on his mother's lap reminds us of a king sitting on his throne, which once again reinforces his kingship. Also, both Mother and baby have been orientated in the centre of the painting, which draws our attention directly to them, once again suggesting their significance with the occurring scene. Concluding, Gossaert has successfully represented the Epiphany and has included an immense amount of detail where symbolism is concerned. ...read more.