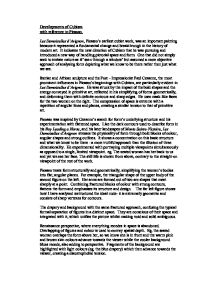 Developments of Cubism - with reference to Picasso.

Developments of Cubism with reference to Picasso. Les Demoiselles d'Avignon, Picasso's earliest cubist work, was an important painting because it represented a fundamental change and breakthrough in the history of modern art. It indicates the new direction of Cubism that he was pursuing and introduced a new way of handling pictorial space and form. One that did not simply seek to imitate nature as if 'seen through a window' but assumed a more objective approach of analysing form depicting what we know to be there rather then just what we see. Iberian and African sculpture and the Post - Impressionist Paul Cezanne, the most prominent influences in Picasso's beginnings with Cubism, are particularly evident in Les Demoiselles d'Avignon. He was struck by the impact of the bold shapes and the energy conveyed in primitive art, reflected in his simplifying of forms geometrically, and deforming them with definite contours and sharp edges. He uses mask-like faces for the two women on the right. The compression of space is extreme with a repetition of angular lines and planes, creating a similar tension to that of primitive art. Piccaso was inspired by Cezanne's search for form's underlying structure and his experimentation with flattened space. ...read more.

The women are framed by drapery which cuts the corners of the painting's border. There are three distinct areas - the two left figures, the two right figures and the central figure. The central woman anchors the work by creating a stable vertical, and leads the eye up the painting. The two groups of women on either side are each contained in elliptical shapes that rotate around the central figure. The triangular shape of the still life and table is reflected in the central woman's stretched arms at the top of the painting. She is the focal point as everything is structured around her. The balance and harmony of the symmetry counteracts the intensity of the paintings shallow pictorial space, harsh fragmentation and multiple viewpoints. Picasso uses a limited palette of dull browns, pinks, tan cream and blue, so as not to distract from or compete with my primary interest; the structure of the forms. It also maintains unity and indicates different forms. eg. the central woman stands out against the blue drapery. Analytical Cubism highpoint of Cubism, where the subject became so abstracted that all sense of recognisable form almost disappears. In the Portrait of Ambroise Vollard Picasso fragments the human form into an entire work of transparent geometric planes that intersect at a variety of angles. ...read more.

Still Life with Chair Caning questions the relationship between the realm of reality and the realm of illusion. Collage began to incorporate everyday elements of the 'real' world, usually foreign to art (glass, tin, stenciling, newsprint) intermingling them with the illusionistic world of art, blurring their boundaries and creating a new interplay between the two. Combining an oilcloth simulation of a cane chair (an illusion of an everyday object) with abstracted more ambiguous shapes, questions what is real and what is illusion and where the two coincide. The letters 'Jou' is a reference to the newspaper 'Le Journal' - intended to remind the viewer of the reality, but simultaneously it is a pun, being the three letters of 'jouer,' meaning 'to play/to run the risk.' The Cubists considered pasting symbols of everyday life to be more real than imitating nature directly as these elements make the viewer more conscious of the canvas itself and that it is capable of deceit. A contrast in surface textures is created by collage, and allowed Synthetic Cubism to expand its materials and create variety, a change from Analytical's severity. eg. the oilcloth, the paint and the rope. Being his first collage, this work retains a limited palette, however colour came to play a major role in Synthetic Cubism's decoration and return to identity. ...read more.