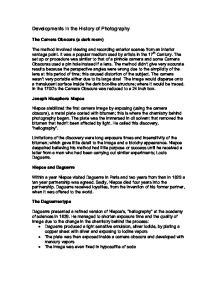 Develpment in the History of Photography

Developments in the History of Photography The Camera Obscura (a dark room) The method involved viewing and recording exterior scenes from an interior vantage point. It was a popular medium used by artists in the 17th Century. The set up or procedure was similar to that of a pinhole camera and some Camera Obscuras used a pin hole instead if a lens. The method didn't give very accurate results because the perspective angles were wrong due to the simplicity of the lens at this period of time; this caused distortion of the subject. The camera wasn't very portable either due to its large size! The image would disperse onto a translucent surface inside the dark box-like structure; where it would be traced. In the 1700's the Camera Obscura was reduced to a 24 inch box. Joseph Nicephore Niepce Niepce stabilized the first camera image by exposing (using the camera obscura), a metal plate coated with bitumen; this is where the chemistry behind photography began. The plate was the immersed in oil solvent that removed the bitumen that hadn't been affected by light. ...read more.

Hershel Hershel, an astronomer and a scientist, has to receive some thanks for discovering that the chemical used of fixing (hyposulfite of soda) would protect an exposed image through time. He gave name to the reversed and re-reversed copy; with the term common to us as the positive and negative image. Hershel also named the light writing process photography. William Henry Fox Talbot The British scholar was amazed by The Daguerreotype. Unaware, Talbot had formerly been developing a process that would fix an image of light on to paper. Six years prior to Daguerre's demonstration, Talbot had invented a permanent photographic process. He coated paper with silver chloride, a light sensitive chemical, and placed objects on the paper then exposed to the sunlight. The chemical emulsion darkened where it wasn't protected from the light by the objects; leaving behind a silhouette (a contact print). In 1841 Talbot patented this process under the name "calotype". The calotype succeeded in ways the Daguerreotype had not: they could be made on paper, they were quite durable, and there was capability for duplication. ...read more.

The projected slides also had to be filtered through different coloured solutions. The experiment was a success but regularly viewing many photographs in this way would be ridiculous! Eastman Kodak In 1935, Kodak marketed a film consisting of three colour emulsions; all fixed on a single plastic film. Although the processing of the film required precise control, the problem was overcome by customers sending their exposed film rolls to the Kodak factory for development. By 1947, Kodak with help from a German company, manufactured films that could be processed at home. The photographer could now shoot, develop and print in colour with the Kodak Ektacolor System. Zeiss In 1949, a Germany company called Zeiss developed the Contax S SLR Camera. It was the first SLR without a reversed image to be seen through the viewfinder; they invented the pentaprism viewfinder. Polaroid Polaroid appealed to the public in the 1950's with a simple to use, and more importantly, speedy method of photography. There was no necessity of a darkroom or complicated chemistry. The whole process of capturing and developing took only minutes and was contained in a single lens reflex camera. ...read more.