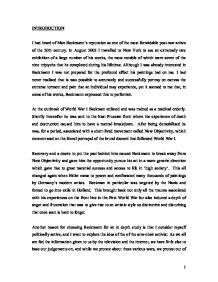 Did Max Beckmann's experiences of war contribute to his success as a painter?

INTRODUCTION I had heard of Max Beckmann's reputation as one of the most formidable post-war artists of the 20th century. In August 2003 I travelled to New York to see an extremely rare exhibition of a large number of his works, the most notable of which were seven of the nine triptychs that he completed during his lifetime. Although I was already interested in Beckmann I was not prepared for the profound effect his paintings had on me. I had never realised that is was possible to accurately and successfully portray on canvas the extreme torment and pain that an individual may experience, yet it seemed to me that, in some of his works, Beckmann expressed this to perfection. At the outbreak of World War I Beckman enlisted and was trained as a medical orderly. Shortly thereafter he was sent to the East Prussian front where his experience of death and destruction caused him to have a mental breakdown. After being demobilised he was, for a period, associated with a short-lived movement called New Objectivity, which concentrated on the literal portrayal of the brutal discord that followed World War I. Recovery and a desire to put the past behind him caused Beckmann to break away from New Objectivity and gave him the opportunity pursue his art in a more generic direction which gave rise to great material success and access to life in 'high society'. This all changed again when Hitler came to power and confiscated many thousands of paintings by Germany's modern artists. Beckman in particular was targeted by the Nazis and forced to go into exile in Holland. This brought back not only all the trauma associated with his experiences on the front line in the First World War but also induced a depth of anger and frustration that was to give rise to an artistic style so distinctive and disturbing that once seen is hard to forget. ...read more.

He wanted to bring you into Max Beckmann's hell, to see all the things he saw or dreamt, the state of Germany, the horror of the human condition, all conveyed in a manner so striking that I for one, will remember them for the rest of my life. I thought it would be appropriate to draw on my own limited experiences in this essay as it is a study on how war effects an individual, and in doing so I have realised an interesting fact, that were it not for television, our knowledge and definitely our feelings may have been entirely different. The only war that we who have the privilege of living in non-conflicted countries see is that through our television. All the pain and suffering of a thousand life-times is condensed into a small 10''x 12'' box, it is hard to imagine what war is truly like for those on that small screen, yet Beckmann had this all around, in living colour. Beckmann lasted at the front line for a year until late 1915 when the situation he was faced with became so extreme that it led him to have a nervous breakdown. At that point he was demobilised after and sent away to recover. During his recuperation he visited Flanders where there were a number of museums and churches, it was here where one of the most seminal moments of his life would take place. Here Beckmann saw the Isenheim Altarpiece (see appendix), originally made for the hospital chapel in St. Anthony's Monastery in Isenheim in Alsace. It is a complicated structure with three entirely different views that are shown in the following pages. This piece was created by Matthais Gr�newald in the 16th century and is considered to express the suffering of Christ better than most of his contemporaries. Beckmann drew great inspiration from this work, and seemed to decide that this tortured realism was something he wished to portray. ...read more.

When you look at a Max Beckmann painting you are looking at a snapshot of how he perceived and more importantly how he felt about what he had seen. The wars and the persecution that he lived through had a massive effect on his attitude to humanity and life in general. His art did not suffer as a consequence but rather developed into such a distinctive and powerful style that it nearly impossible to attribute his post-war works to any other painter. It was as though he needed periods of trauma in order to feed such a stylised approach, it is apparent that a few years after World War One Beckmann seemed to relax and shrug off the pain and discord he had witnessed as a result his image lost their impact to a degree as he slipped back to a more generic manner of painting. This raises the question of whether if Beckmann had not gone through the troubles of war and discrimination would he have been a less celebrated painter, producing such generic and classical images that he began with. In my view, yes. I believe that the experience was integral to his success and without it he would have followed both trend and tradition, merely a greater painters contemporary. To draw back to my point about experiencing war ourselves I wish to say that while we sit in our armchairs watch the images shown to us about the conflicts that plague our world, it is essential that we look to artists like Beckmann so as to understand the true emotional impact of war, as without that our efforts to stop these atrocities will be born out of shallow morality and public opinion, not by true empathy. To conclude this essay I thought it appropriate to include a quote about what a contemporary of Beckmann said about him: 'This is what George Grosz, a fellow New York �migr�, wrote after his death: "Beckmannmaxe was a kind of hermit, the Hermann Hesse of painting, German and heavy, unapproachable, with the personality of a paperweight, utterly lacking in humour. ...read more.