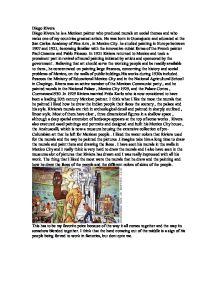 Diego Rivera Diego Rivera he is a Mexican painter who produced murals on social themes and who ranks one of my countries greatest artists. He was born in Guanajuato and educated at the San Carlos Academy of Fine Arts , in Mexico City. he studied painting in Europe between 1907 and 1921, becoming familiar with the innovative cubist forms of the French painter Paul Cezanne and Pablo Picasso. In 1921 Riviera returned to Mexico and took a prominent part in revival of mural painting initiated by artists and sponsored by the government . ...read more.

I think what I like the most the murals that he painted I liked how he drew the Indian people their faces the scenery , the palace and his style. Riviera's murals are rich in archeological detail and painted in sharply outlined , linear style. Most of them have clear , three dimensional figures in a shallow space , although a deep spatial extension of landscape appears at the top of some works . Rivera also executed easel paintings and portraits and designed and built his Mexico City house , the Anahuacalli, which is now a museum housing the extensive collection of pre-Columbian art that he left for Mexican people . ...read more.

I have seen his murals in the walls in Mexico City and I really think is very hard to draw the murals and I also have seen in the museums alot of pictures that Riviera has drawn and I was really impressed with all his work. The thing that I liked the most were the murals that he drew and the painting and how he drew the faces of the people and the different colors of skins of the people . This has to be my favorite peice because of the way it all comes together and the way its somehow blended together. I think that the hand comeing out of the middle is a sign of his people being forced to work in factories, but dont qote me. ...read more.