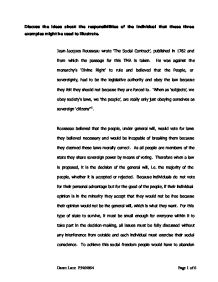 Discuss the ideas about the responsibilities of the individual that these three examples might be used to illustrate.

Discuss the ideas about the responsibilities of the individual that these three examples might be used to illustrate. Jean-Jacques Rousseau wrote 'The Social Contract', published in 1762 and from which the passage for this TMA is taken. He was against the monarchy's 'Divine Right' to rule and believed that the People, or sovereignty, had to be the legislative authority and obey the law because they felt they should not because they are forced to. 'When as 'subjects', we obey society's laws, we 'the people', are really only just obeying ourselves as sovereign 'citizens''1. Rousseau believed that the people, under general will, would vote for laws they believed necessary and would be incapable of breaking them because they deemed these laws morally correct. As all people are members of the state they share sovereign power by means of voting. Therefore when a law is proposed, it is the decision of the general will, i.e. the majority of the people, whether it is accepted or rejected. Because individuals do not vote for their personal advantage but for the good of the people, if their individual opinion is in the minority they accept that they would not be free because their opinion would not be the general will, which is what they want. ...read more.

Our view, is directed to the women in mourning and to the vanishing point which is just above the left shoulder of the taller of the woman in red. The colour and tonal range are both wide; the bright warm colours of the women contrasts with the dark dull colours of the men on the left. Light floods the female figures from the left but only highlights the body of one of the sons and the feet of Brutus which are taut and with clenched toes. The females seem to be sharing their grief whilst Brutus is alone in his own thoughts, separated from the rest of the room by means of turning his back on them. Whilst studying this painting, I am struck by the thought that Brutus is wondering what he has done to both his family and the state. Obviously not wanting to return to life under rule by the Monarchy, he has had no choice in committing his sons to death. Brutus makes a decision for the good of the people - the general will. ...read more.

What does the misty vista reveal to the man? I feel the painting suggests, by means of the vast horizons, that we should look into ourselves, 'and our own resources of feeling and thought in order to discover meaning'4. These three examples define the responsibilities of the individual in contrasting ways. Rousseau believed people should ignore the individual will and that by being noble and good, they would obey the general will which is their will anyway. David's painting of Brutus was 'seen as a representation of a kind of political heroism in which the best interests of society are put before those of the individual'5, whilst the individual in Freidrich's painting is thinking of himself before anything else. I suggest that people have a right to live as they wish so long as it is within the principles and laws of the society or state in which they live. No individual's rights within that society can override the rights of the society as a whole, whilst any changes to the laws must be made as a group in a consensual and democratic way. Individuals have a responsibility to respect and nurture the rights of others whilst the society in which they live also has a responsibility to protect their rights to freedom within that society. ...read more.