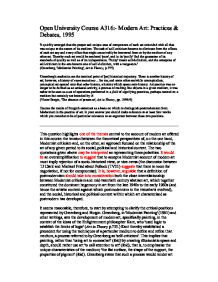 Discuss the merits of Burgin's statement as a basis on which to distinguish postmodernism from Modernism in the practice of art.

Open University Course A316:- Modern Art: Practices & Debates, 1995 'It quickly emerged that the proper and unique area of competence of each art coincided with all that was unique to the nature of its medium. The task of self-criticism became to eliminate from the effects of each art any and every effect that might conceivably be borrowed from or by the medium of any other art. Thereby each art would be rendered 'pure', and in its 'purify' find the guarantee of its standards of quality as well as of its independence. 'Purity' meant self-definition, and the enterprise of self-criticism in the arts became one of self-definition, with a vengeance.' (Greenberg, 'Modernist Painting', Art in Theory, p.755) 'Greenberg's aesthetics are the terminal point of [an] historical trajectory. There is another history of art, however, a history of representations ... for me, and some other erstwhile conceptualists, conceptual art opened onto that other history, a history which opens onto history. Art practice was no longer to be defined as an artisanal activity, a process of crafting fine objects in a given medium, it was rather to be seen as a set of operations performed in a field of signifying practices, perhaps centred on a medium but certainly not bounded by it'. (Victor Burgin, 'The absence of presence', Art in Theory, pp. ...read more.

175) which 'plays upon the irony that language is both a medium supposedly distinct from art and the source of information about art's content and meaning' (Modernism in Dispute, p.205). Burgin provides a basis for identifying work as postmodernist rather than Modernist, and also sets postmodernism in the context of its antecedents in, for instance, Heartfield's photomontages and Duchamp's readymades. The concept of postmodernism seems to have become current from the early 1980s onwards, when it began to appear in the work of writers such as Lyotard and Jameson. These writers were not specifically discussing art but more general cultural tendencies. However, Burgin's challenge to the dominance of Greenbergian criticism can be connected with Lyotard's definition of postmodernism as 'incredulity towards metanarratives', in this case the metanarrative of technical development in painting . Early attempts to define postmodernism in the visual arts by writers such as Krauss and Owens, 'started from an assumption that the stylistic diversity of art after Modernism ... conceals from view some underlying unifying principle:' (Modernism in Dispute, p.237). However, it is arguably easier to say that a specific work, or the work of a specific artist, is postmodernist than to define what, precisely, constitutes postmodernism. The range of concepts associated with postmodernism are, as Harrison and Wood admit, complex and prone to a degree of vagueness and instability. ...read more.

This is in direct opposition to the passive contemplation advocated by Modernist critics such as Fried who, in Art and Objecthood, claims that good art should be 'instantaneously present'. This idea of the importance of 'presentness' is contradicted by the title of Burgin's article, 'The absence of presence'. Taking Burgin's statement as a point of departure, it is possible to connect postmodern ideas to a diverse range of works of art, which are in turn associated with a series of contemporary concepts and concerns. While Burgin provides a means of distinguishing postmodernism from Modernism in art, there remains the problem of how to, or indeed whether, one ought to distinguish qualitatively between different postmodernist works. If social relevance is a characteristic of postmodernism, then degree or accuracy of social relevance may be used as an evaluative tool; however, as Harrison and Wood have pointed out (see Modernism in Dispute, p.240) radically critical work may become marginalised and lose its ability to challenge. Furthermore, if the main impact of a work depends on its contemporary relevance, it is likely to lose conceptual value with the passage of time; Haacke's The Safety Net (pl.D24) borrows its meaning from contemporary politics rather than conforming with Greenberg's idea of art as self-defining, and is hence now arguably of historic rather than artistic interest. The aesthetic of Greenbergian Modernism may never recover a dominant position within art history but, as Harrison and Wood have suggested, 'the contingency of the historical is only half the point of art'. ...read more.